The sleek & sturdy Solomons Master accommodates a maximum of 16 divers (11 to Bikini Atoll) taking them to experience the wonders of the wrecks of the remote Solomon Islands & Bikini Atoll.

A word from Dom :  "The choice of this vessel for Bikini Atoll is ideal.  Totally refitted, sturdy and stable she's fully capable of making the lengthy trek from Truk to the Marslall Islands.    She has excellent tech diving capacity & offers everything a wreck diver desires  A good choice for both Bikini Atoll & Truk Lagoon .".... Dominick Macan

ON BOARD SOLOMONS MASTER

With 3 full decks and a fly bridge, you'll finld plenty of space for relaxation and good accommodation for your dive equipment and camera preparation. The fly bridge offers tanning options to sun lovers & great vistas of the islands .... while on the upper deck, you can relax in the shaded outdoor lounge on the large stern deck.  Inside on the upper deck is the popular lounge & bar area with its big plasma screen as well as the master cabin.  Dining takes place in the spacious restaurant on the main deck where you also find 4 of the 8 cabins.  At the stern is the the camera room and a dive deck with loads of space for everyone, including photographers and technical divers.  The remaining 3 cabins are found on the lower deck.

The United States tested 67 nuclear weapons on the Marshall Islands between 1946 and 1958. ‘Castle Bravo’ in 1954 is the best-known. This 15-megaton TNT hydrogen atomic bomb was a thousand times more powerful than the bomb dropped on Hiroshima. It left a crater in the lagoon of 2 kilometres wide and 76 metres deep.

For over 60 years, the nuclear ghost fleet (as these wrecks are known) lay in crystal clear waters which over time developed an abundance of marine life with thriving reefs and corals. Bikini Atoll was opened for diving in 1996, allowing divers to experience some of the most unique wreck diving in the world.  The diving is available to technical divers only and you need to be minimally normoxic trimix certified.

There will be 2 technical dives offered per day. For safety, the minimum surface interval between dives is 4 hours and it is mandatory to take an afternoon off mid-trip (optional land tour and beach BBQ will be offered instead of diving). Travel time between Ebeye Island and Bikini Atoll is 23-34 hours depending on conditions. It may be possible to dive the German heavy cruiser Prinz Eugen wreck near Kwajalein as a check dive before sailing overnight to Bikini Atoll 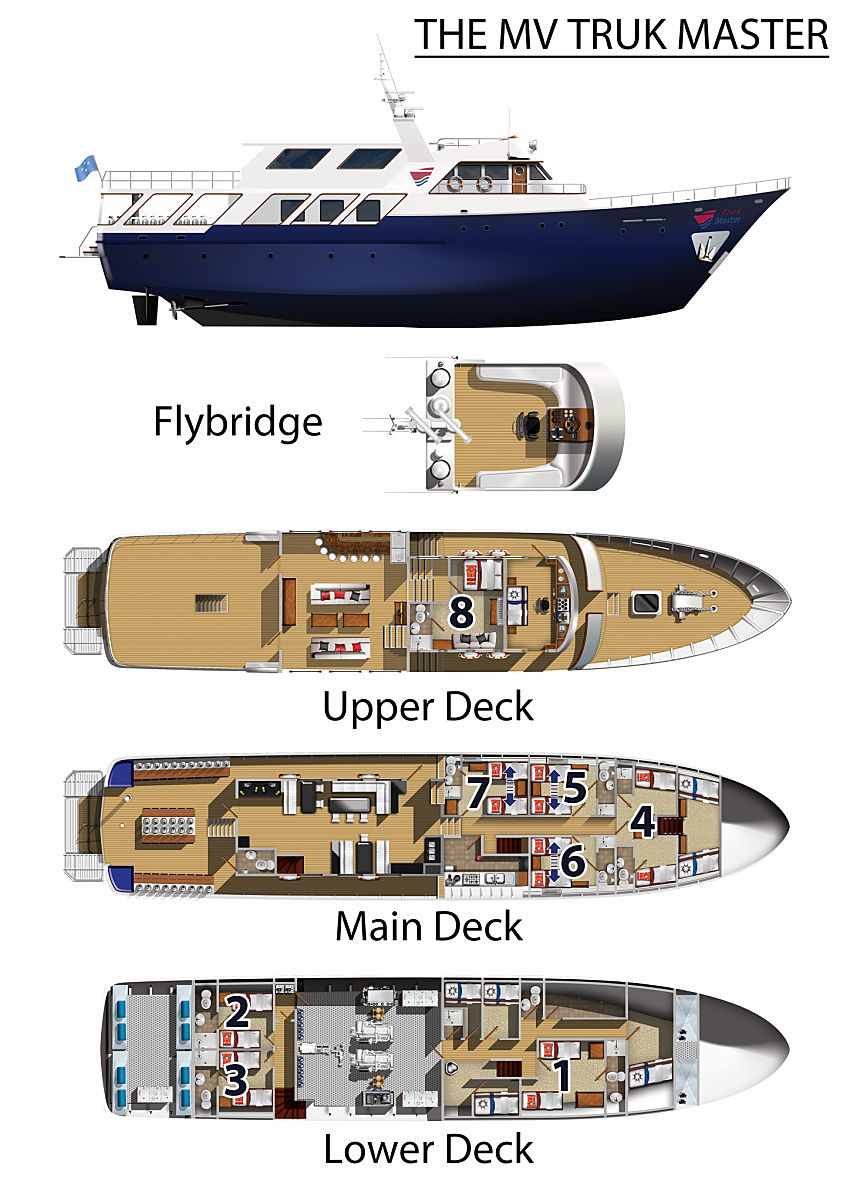 VIEW THE ITINERARY AND ITINERARY MAP FOR BIKINI ATOLL ..... open

Due to the fact that Bikini's wrecks are only suited for extended range diving, there will be 2 technical dives offered per day.   You will be responsible for planning your own dives, with the assistance of the Cruise Director. For safety, the minimum surface interval between dives is 4 hours and it is mandatory to take an afternoon off mid-trip (optional land tour and beach BBQ will be offered instead of diving).

Travel time between Ebeye Island and Bikini Atoll is 23-34 hours depending on conditions. It may be possible to dive the German heavy cruiser Prinz Eugen wreck near Kwajalein as a check dive before sailing overnight to Bikini Atoll.

The crew will take you to as many of the following sites as time and conditions allow:

USS Saratoga
The signature dive of Bikini Lagoon is the USS Saratoga CV-3 Lexington-class aircraft carrier, one of only 3 diveable carriers in the world. At 270 metres (888ft) long and 29 metres (95ft) wide, this 39,000-ton warship rests in Bikini Lagoon at a depth of 52 meters. Her bridge is easily accessible at 18 meters depth, and her flight deck at 28 meters.
HIJMS Nagato
Launched in 1919 by the Imperial Japanese Navy, the Nagato was the lead ship in her class and often served as flagship during WWII and one of the most powerful and versatile warships in the world at that time.
USS Arkansas
An American dreadnought launched in 1911, measuring 171 meters (562 ft) long, armed with twelve 12-inch guns and capable of a top speed of 20.5 knots. The USS Arkansas served in both WWI and WWII; escorting convoys in the Atlantic and bombarding shore targets during the invasions of Normandy, Iwo Jima and Okinawa.
USS Apogon
A second submarine of the Balao-class that headed straight for Hawaii and the Marshall Islands after her launch in 1943 to patrol areas of the South Pacific and attack enemy ships. The Apogon lies completely intact at a depth of 48 meters with an average depth of 43 metres. Stern torpedo tubes as well as viewing binoculars on the bridge are still visible.
USS Anderson
The Sims-class destroyer launched in 1939 totaled 106 meters (348ft.) long by 11 meters (36ft) wide. She served at different locations in World War II; she participated in fighting battles in the Atlantic and the Pacific using her machine guns, anti-aircraft missiles and torpedoes, taking down many enemy aircraft.
USS Lamson
This Mahan-class destroyer was based in Pearl Harbor but avoided damage during the Japanese attack as she was returning to port from patrol duty when the airstrike occurred. With her length of 104 meters, she might not be the biggest of the Bikini wrecks but nevertheless very interesting to explore as she features several guns, torpedoes, bombs and generally provides good access to divers...
Prinz Eugen - Kwajalein Atoll
This German heavy cruiser was surrendered to the British Royal Navy who then gifted it to the US Navy as a war prize. She survived the blasts of Operation Crossroads, even though she was already damaged, and she was towed to Kwajalein where she ultimately capsized and sank to her final resting place in December 1946. 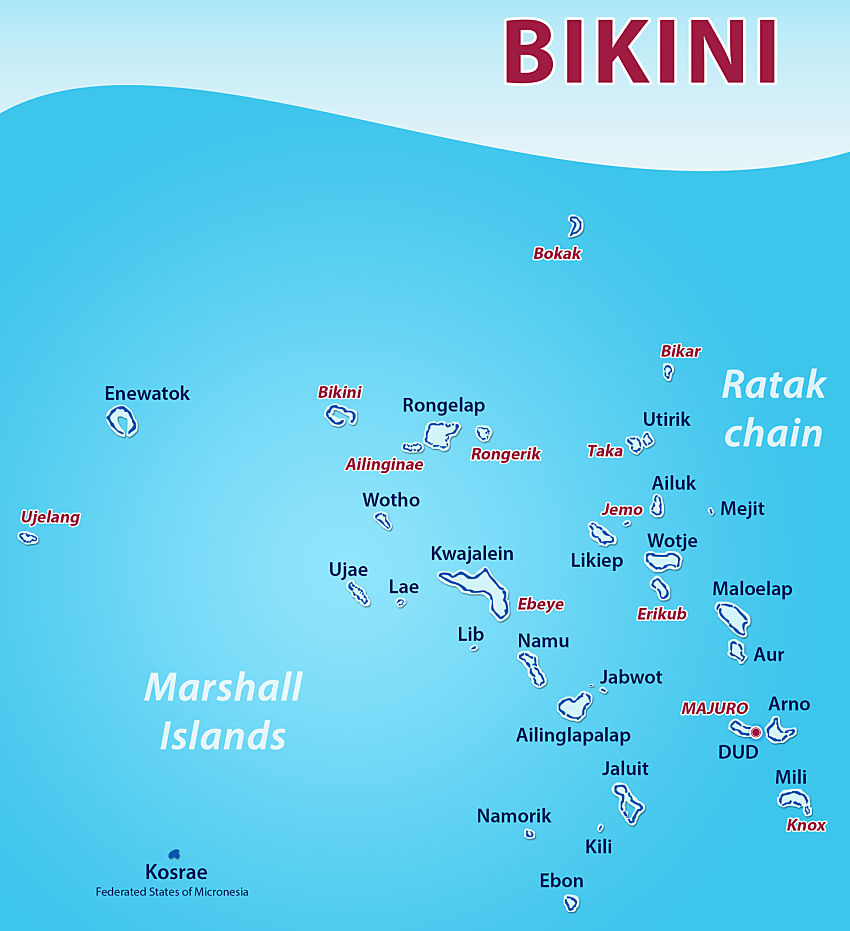 Bikini Atoll trips are scheduled from May through September.  The other months of the year, Pacific Master operates at Truk Lagoon.  TRUK LAGOON

The itinerary is built around the United Airlines flight from Honolulu, Hawaii that serves both Kwajalein and Majuro airports in the Marshall Islands. Depending on your itinerary, we highly recommend you use this Hawaii connection to get to and from Kwajalein and/or Majuro. Passengers travelling from the Marshall Islands are required to pay an airport departure tax, For Kwajalein this is currently $20US. This varies from airport to airport and must be paid in US dollars

From the airport you are shuttled to a ferry that brings you to Ebeye Island in 20 minutes. From there you will embark the Truk Master.

At the time of writing, no visa is required for entering the Marshall Islands for US citizens, EU countries, Canada and most other Western countries. Nevertheless, it is imperative that you check for any updates and changes with their nearest Marshall Islands embassy or consulate as requirements evolve based on world politics and health concerns.