A word from Dom: "The Cayman Aggressor V is moving to the British Virgin Islands, adding a new dimension to the Aggressor Fleet's Caribbean diving. The BVI Aggressor, big, roomy contemporary, has extremely popular since introduced & she's an ideal choice for those interested in diving BVI."  ..... Dominick Macan

ON BOARD BVI AGGRESSOR

This built-for-purpose vessel has everything a Caribbean diver could want.  The huge top sun deck features lounging and deck chairs.  There's also a wet bar & grill, stereo and CD player (which has an IPod plug-in) and a hot tub ... and tables & chairs can be set up here for alfresco dining. One level down, the upper deck has an enormous restaurant & covered exterior lounge deck at the aft with plenty of comfy seating, a great place to enjoy after-dive cocktails.

The large interior lounge on the main deck has plenty of room to settle in, watch movies, listen to music or work with your digital photography.  A complete photo center with a digital video and still photo editing computer is available. This deck also houses the huge dive deck & camera tables plus 2 large suites, each with its own balcony.

The menu features a variety of American cuisine, barbecues and local cuisine. Breakfast is cooked to order, there's a buffet lunch and dinner with tableside service ... plus, you'll have fresh mid-morning and mid-afternoon snacks. 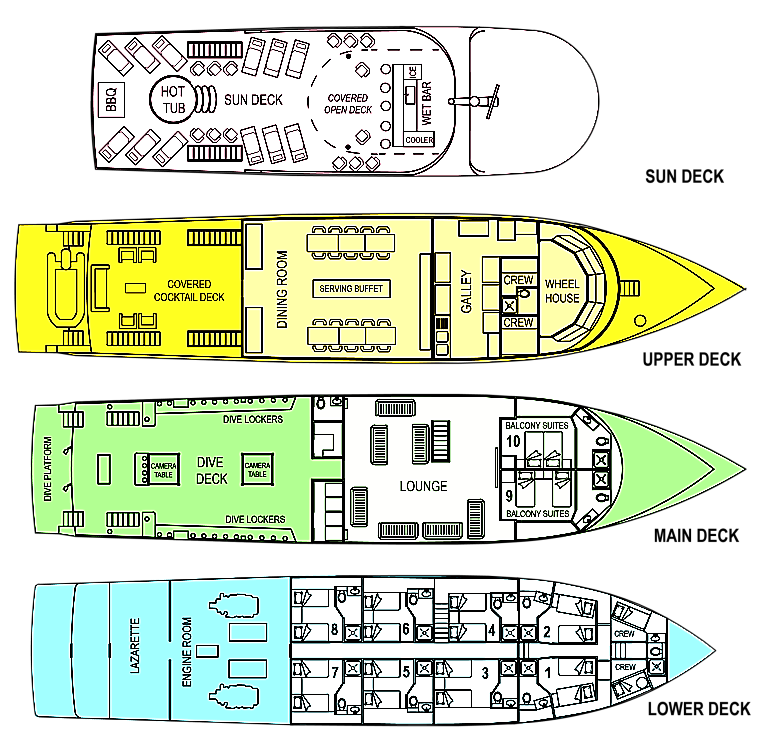 Port: George Town, Grand BVI
The BVI Aggressor is built and maintained to the specifications of the local regulatory agencies and the regulations of the country of the flag.

The BVI Islands has been an Aggressor destination since 1984.

Captains and staff are professionally licensed as required by the laws of the country in which the yacht operates and complies with and the appropriate flag state regulations and/or SOLAS (International Convention for the Safety of Life at Sea) standards. All yachts are required to follow Aggressor Fleet® Standard Operations Procedures (SOP). Dive instructors and dive masters are trained and certified by international recognized certification agencies. Each receives proficiency training and annual inspections to review safety aspects.

BVI Aggressor will take you on 7 or 10-day itineraries which include the highlights of BVI diving featuring some great topography.

Norman Island : at the southern tip of the British Virgin Islands archipelago & reputed to be the inspiration for Robert Louis Stevenson's pirate novel Treasure Island.

Peter Island :  Legend says Deadman's Bay on this island is named for pirates who were marooned on neighboring Dead Chest Island and subsequently drowned swimming to Peter Island.

Open-water pinnacles, canyons & a cave will bring you angelfish, butterflyfish, fairy basslets, lobsters, sea turtles, nurse sharks and moray eels. Add in two wrecks (The Fearless is believed to be the sister ship of Cousteau’s Calypso) with black coral trees & French grunts, plus “Painted Walls” a site offering yellow, red, orange, and purple corals & plenty of macro life, to top off the diving at this island.

Salt Island :  Named after its salt ponds, which were once an important resource for islanders.

You’ll dive a steamship wreck from 1867 which was filmed in the 1977 Hollywood thriller, The Deep and which contains some interesting remaining artifacts. . Nearly every surface is covered in a kaleidoscope of corals while inside you'll find coral gardens, cleaning stations and nurseries. Schools of yellowtail snapper, jacks, grunts, and tarpon swirl around … and macro life includes arrow crabs, shrimp and damsel fish. In addition, you’ll most likely dive Wreck Alley, with four additional wrecks plus a huge pinnacle with a good selection of the Caribbean’s cast of characters. You’ll also find an open water site not far away with a chance of spotting some pelagics and plenty of fish

Ginger Island : One of the last undeveloped privately held islands in the territory. It is the location of two of the more popular dive sites in the British Virgin Islands: "Alice in Wonderland" and "Ginger Steps".

Virgin Gorda: Christopher Columbus is said to have named the island "the Fat Virgin", because the island's profile on the horizon looks like a fat woman lying on her side.

Sample itineraries and maps are for illustrative purposes only. The exact route and sites visited are subject to change based on local regulations, guest experience, weather and logistics, and is at the Captain’s discretion. 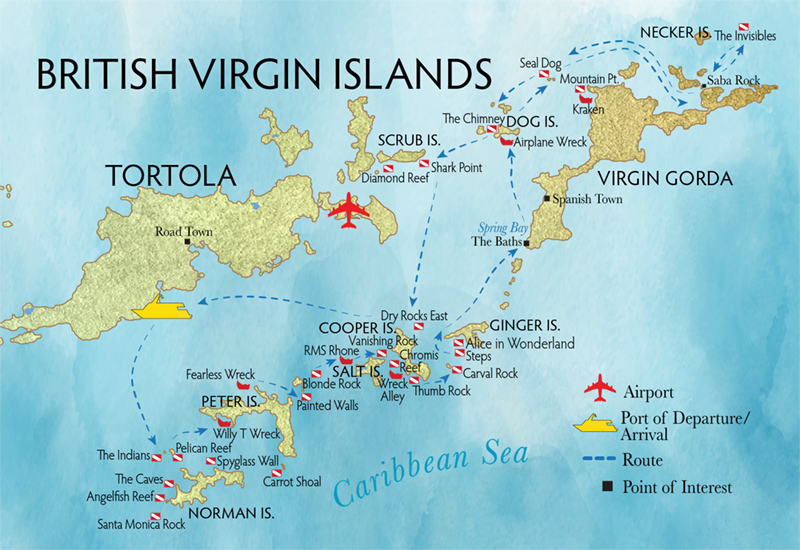 The British Virgin Islands’ international airport (EIS), officially the Terrance B. Lettsome International Airport (also known as Beef Island airport), is located on Beef Island, which connects to Tortola via the Queen Elizabeth II bridge.  The yacht departs from Roadtown, Tortola.  Guests must be onboard Saturday by 5 pm

We recommend arriving 1 – 2 days early to enjoy the beautiful island of Tortola & make sure you avoid being stressed due to delayed flights or missing bags.