Fiji is one of those rare destinations which is ideal for all divers - novice to advanced - and for non-divers, too ....a splendid vacation option when one partner is a diver & one is not.  The islands themselves, rich with quintessential lush tropical splendor, allow an escape from the "real world" & seduce with their crystalline white beaches, raging waterfalls, copious hiking trails, kayaking, windsurfing, snorkeling, horseback riding.  In short, you name it, you've got it in Fiji  ...  read more

And, nowhere in the world will you encounter a people warmer & more welcoming than the Fijians.  For the cultural aspect alone, this archipelago of 300+ islands more than warrants a visit.

However, let me be absolutely frank.  Fiji isn't at the tip-top of my diving list as I'm personally drawn to waters crawling with exotic critters or with non-stop big predator action & spine-tingling underwater experience.

That being said, I'm also going to tell you that I've been to Fiji four times (and will be back again!) .... and the best of the diving there is as good as it gets anywhere, particularly if you are awed by the wonder of healthy coral reefs.

And, there ARE big predators to be found, if you're a big animals fan.  Plus, the resorts & liveaboards are simply top-notch - I'd say, hands-down some of the finest in the world.

So, the bottom line ? No question that Fiji offers ample options to satisfy your lust to dive.   Fiji boasts several dive sites such as the Somosomo Straits considered to rank with the finest in the world.  You can find everything from macro to pelagic action in addition to the world-famous corals, which every diver should experience at least once in a lifetime.

When you're ready to hear more, I'm an email away and will respond to your request with any additional details that you wish.    Cheers, Dom

Looking for EYE-CANDY?   You will find some of the world's most renowned CORAL GARDENS and sought-after WALLS, plus enough exotic CRITTERS to delight macro phototographers, some fine PELAGIC DIVES .... and some absolutely great ripping currents and exciting DRIFT DIVES.

The volcanic nature of the land mass gifts divers with sweeping walls and great channels, most of which are teeming with healthy hard & soft corals, super sponges, astonishing brain corals, ethereal fans and other species which create the effect of an underwater flower garden.

Of course, where you have corals you also have reef fish - and in the best of the diving sites you'll find an abundance of species. You'll find rare fish species of astonishing colors, plentiful schools of both large & medium-sized fish, along with rays in abundant quantities. But look closer. The critter world here is a photographer's delight!

The very best sites are accessible by liveaboard ... although day boats from the resorts can get you to some great diving, too.   However, by liveaboard, you'll get all the coral you desire plus great shark action with a variety of species and tons of other pelagics - barracudas, trevallies, surgeonfish, eagle rays and occasional hammerheads.

Smaller fish include anthias, fusiliers, frogfish, ghost pipefish and leaf scorpion fish, to name a few - and then at night giant cuttlefish, the amazing flashlight fish, arrowhead crabs and cowries can be found.

For a dedicated Fiji diving trip, you can't do better than the exquisite sailing motor yacht, Nai'a, one of the diving world's most treasured liveaboards. .

Or see our list of perferred resorts, all of which offer diving opportunities.  These are particularly inviting if there are divers and non-divers in your group, or if you're looking for a romantic getaway which includes some lovely diving.

These resorts all offer the non-diving amenities for which Fiji is world famous - the hiking, the waterfalls, the kayaking, the horseback riding. 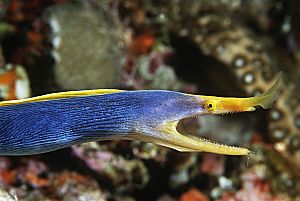 CENTRAL FIJI ... corals, critters, schools ... and curents
Central Fiji is often considered Fiji's finest diving - with corals, corals, corals and more corals - which provide enchanting habitat for captivating critters.  But beyond the corals & critters are dives which include the wide open sea, 1000-meter walls, exciting passages & deep canyons, also some wild currents & lovely calm lagoons.  From Bligh Water in the north-west, moving diagonally between the two largest islands of Vanua Levu & Viti Levu, into the Koro Sea, is an area known as Lomaiviti - "Fiji's Big Fish Capital". This area is only accessible by liveaboard and is generally regarded as Fiji's finest diving  ...... read more

Here, the Islands of Namena, Makogai, Koro, Wakaya, Batiki, Nairai, Gau, Ovalau and Moturiki are mostly the peaks of deep sea volcano's rising from 1000 to 3000 meters. While there's no doubt that the main draw is coral, coral, coral and more coral . . . there's so much more in this area of Fiji.

The surrounding reefs in the central are fed from major ocean currents and upwelling from the deep sea. This means tons of nutrients flowing in from the oceans, which in turn means marine life galore.

In places you have wide open sea, then 1000 meter walls and passages & canyons with strong currents, then calm inside reefs forming the habitat for large schooling fish like tuna, barracuda, trevally, snapper.... gray reef sharks, hammerheads, manta rays, turtles... as well as whales and dolphins.

This is what awaits you on a visit to Fiji. 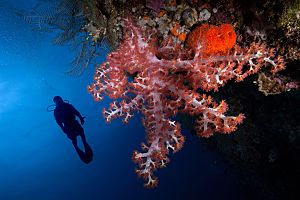 SOMOSOMO STRAIT ... rainbow reef & great white wall ... a paradise of corals
The Somosomo Strait is renowned for superb coral gardens featuring rainbow displays of soft corals. You'll dive the fabled Rainbow Reef & Great White Wall.  In spite of its notoriety for magnificent corals, the straits also offer some super pelagic dives. In certain spots, be prepared for ripping currents.  Taveuni Island is commonly known as the "Garden Island" due to both its exceedingly lush tropical vegetation and its proximity to remarkable "gardens" of coral in the surrounding seas  ...... read more

Located across the Somosomo Strait from the big island of Vanua Levu, this region is one of the richest coral areas in the world. Nearby, the world famous Rainbow Reef & Great White Wall have been noted in the 'Top 10 Dive Locations in the World' by U.S. Divers magazine. Rainbow Reef is an large area of more than 20 dive sites. The most famous of these is the "White Wall".

Divers usually choose the Yellow Tunnel, to begin the ride, plunging into a world of vivid yellow coral. Next comes the White Wall through a different tunnel in the reef, past sea fans and blue ribbon eels, before reaching a 200-foot drop-off. The soft coral covering the enormous Great White Wall is, in fact, a light lavender shade. But the depth gives the wall a surreal white glow, as if illuminated by some electric light source.

The nutrient rich waters also bring plenty of pelagic fish species and you can expect to see barracudas, reef sharks and manta rays, particularly at a site fondly known as The Zoo.

You do need to be prepared for the possibility of some strong currents when diving around Taveuni. Usually, the currents are gentle drifts which carry you on a "ride" past some of the most awesome displays of soft corals on the planet. But, the currents can rip & if you're up for it, that's the best time to be there, as the corals open fully & the sights will take your breath away . . . 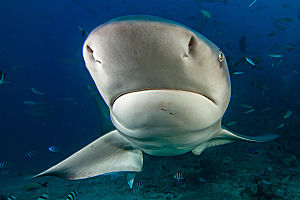 Located on the southern tip of Viti Levu, the lagoon is easily accessible from the Nadi airport & is a nice Fiji option.

For less experienced divers or for visitors who don't want to take a domestic flight to the outer islands of Fiji, scuba diving at Beqa could be the option you're looking for.

The lagoon, more than a hundred square miles of clear water is surrounded by a barrier reef, which means you don't have any ripping currents. The bommies feature a series of channels, caverns and windows, all of which sport colorful corals. 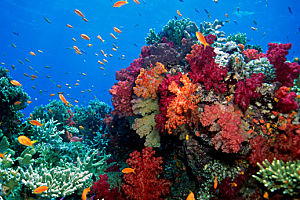 KADAVU ... great astrolabe barrier reef ... 4th largest in the world
Featuring a fine array of hard corals in addition to the usual Fiji soft corals, Kadavu is also known for its Great Astrolabe Reef, the fourth largest barrier reef in the world. It's good diving for novice divers but beware ... those wild Fiji currents are lurking. Know where you're diving!   The island of Kadavu is situated approximately 90 kilometers south of the main island of Viti Levu & is Fiji's fourth largest. It is one of Fiji's most rugged areas, with a number of high mountains and few roads ......  read more

Kadavu's visitors are attracted by its natural beauty & is particularly famous as a scuba diving destination, due to its proximity to the world-renowned Great Astrolabe Reef off the eastern end of the island. The reef is one of Fiji's largest, stretching northwards about half the distance to Suva.

The beauty of the Great Astrolabe Reef is well known amongst divers. The reef is about 100 km long, making it the fourth largest barrier reef in the world and is home to a variety of stunning hard & soft corals.

The pristine fringing reefs are now becoming as popular as the barrier reef, and offer some lovely opportunities for any diver, but particularly the novice.

There are places where, at times, you'll encounter some of those wild-ride Fiji currents, so be sure your dive master knows your level.  read more

Lying in the exotic heart South Pacific .... roughly 1000 nautical miles northeast of New Zealand ... and east of Australia ... is the dazzling Republic of Fiji.   It is surrounded by other exotic Pacific Island nations - the Solomon Islands, Vanuatu & Tonga – all of which also offer superb underwater experiences.  With its more than 330 islands, a third of which are inhabited, Fiji is the quintessential tropical paradise above & below the water line.