I still dream about the heart-pounding encounters I had in the Tuamotus, drifting wildly on raging currents through the passes, surrounded by countless numbers of magnificent pelagics riding the tide into the lagoon, as if tobogganing in the Alps ... but I was elbowing my way through tiger sharks !  Grey reef sharks, black tips, mantas, napoleon wrasses were flying above me in droves.       read more ....

Tahiti, the quintessential tropical holiday destination, offers easy, generally pleasant diving almost anywhere you choose to get into the water.  But for divers seeking challenge, excitement and some of the most spectacular underwater thrills that exist anywhere in the world, it's Fakarava and/or Rangiroa in the Tuamotu Archipelago that you want ... or, if you're lucky enough to hit it right, you may be able to secure a space on a rare cruise through the Marquesas.

Imagine an intimate group - maximum 8 divers - on your own comfy catamaran (you'll find two of these on our site - Aqua Tiki II & Itemata) - diving the rushing waters of some of the most exciting pass dives in the world with sharks & mantas & more!   Or choose the other end of the spectrum and go with the brand new & incredibly sturdy French Polynesia Master. Check out our liveaboards & land-based diving suggestions by clicking on the menu at the top right of this page.

When you're ready to hear more, I'm an email away and will respond to your request with any additional details that you wish.      Cheers, Dom

A STUDY IN CONTRASTS

However for us, in the world of scuba divers, we know it is so much more .... as the ocean holds yet more wonders than the land.  For the diver, French Polynesia is one of the most electifying, arousing & hair-raising destinations on the planet!

Twice daily, tidal waters surge through narrow passes from ocean to lagoons ... and back again ... createing a unique drift dive environment so awesome, that words have no adequate power to describe the experience.

And, probably needless to say, it isn't just zooming along with the current which is exciting.  It's the fact that you can have schools of thousands of fish hurtling along with you on the ride ... not to mention dozens of sharks (which are shoulder to shoulder with you !) .... which makes this occurence beyond exhilarating.

If you love adventure diving, this is one ride you absolutely shouldn't miss.

ESCAPE TO BLISS ON ONE OF OUR DIVE LIVEABOARDS

You may choose to dive from a few excellent land-based options but serious divers who wish to experience the most remote areas and to access the best of the diving in the French Polynesian archipelago will want to be on a dive liveaboard.  We have chosen the vessels we have full confidence in.  They run reliable, safety-conscious, professional diving adventures which we recommend without hesitation.   Add a few days, or a week, on land ... and you have the perfect dive holiday ! 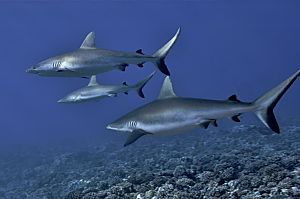 FAKARAVA ... THE BEST PASS DIVING IN THE WORLD WITH SHARKS GALORE
The 2nd largest atoll in the Tuamotu Archipelago, Fakarava is an immense barrier reef of coral, forming a ring 37 miles long by 15 miles wide which contains a spectacular lagoon.  Due to the rich diversity of the ecosystem, Fakarava and 6 neighboring islands in the archipelago, make up a UNESCO Biosphere Reserve.  A one hour and 10-minute flight from Tahiti brings you to Fakarava and it's awe-inspiring diving. There are two passes in Fakarava which connect its lagoon to the ocean – in the north, Garuae Pass which is more than 1/2-mile wide & the largest in the Tuamotus; in the south is a much narrower pass, Tumakohua Pass, around 200 meters wide  ......  read more

The underwater life found in the two channels is abundant and varied - including some glorious corals.   You will encounter huge schools of sharks (large concentrations of gray sharks, but also white tips, black tips, sleepers, great hammerhead sharks, sometimes tigers ...).    You will also see barracudas, eagle rays and manta rays, napoleon wrasse, as well as dolphins and a multitude of different schools of fish: big-eye snapper, goatfish, groupers and lots of moray eels ...   At certain times of the year, you can view passing humpback whales, melon-headed whales, whale sharks, giant groupers, schools of manta mobilae ...

But there are no words to describe the rush of diving in the channels with immense numbers of these animals, as the water carries divers and wildlife alike surging in or out of the lagoon, to or from the blue waters of the ocean.

In addition. you're in French Polynesia, perhaps the most consummate example of Paradise on the planet. Above the water-line and below, you'll find wonders of nature that have few equals.

There's no Disneyland ride to equal this ! 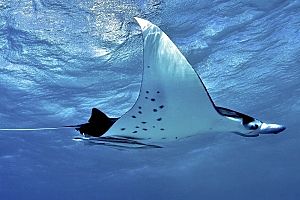 RANGIROA ... MORE ABSOLUTELY SPINE-TINGLING PASS DIVING
After arriving on the main island of Tahiti, it's less than an hour's flight to Rangiroa, the largest atoll in the Tuamotus (and one of the largest in the world). An oval reef, stretching 50 miles in length, Rangiroa encircles a serene, aquamarine lagoon brimming with life & almost identical to Fakarava in terms of being some of the most thrilling diving in the world.  The two large passes allow the flow of water between ocean and lagoon & here you find sharks in unbelievable numbers. The species you are likely to encounter are grey reef sharks, silvertips, whitetips & blacktips .... lemon sharks & nurse sharks & tiger sharks .... silky sharks & great hammerheads  ... read more

The exhilarating diving is done in these passes on incoming tides. You'll surge through the passes on the drift dives of your life .... fish & sharks & rays all boiling around you doing the same drift!  Spine-tingling & unforgettable.   There are lovely lagoon dives also with beautiful corals, plenty of turtles, morays and reef fish (unicornfish, surgeonfish, paddletail snappers, fusiliers, kingfish, soldierfish ....). Mix in a few critters and you have super dives.

On the ocean side, the action is generated by the schools of Napoleon wrasses, barracudas, snappers, dogfish tuna, bigeye jacks .... plus, of course, more dolphins & sharks 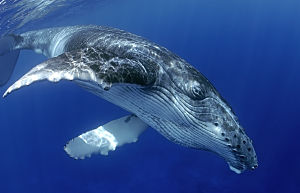 HUMPBACK WHALES AT MOOREA AND RURUTU
From mid-July to late October, French Polynesia is home to humpback whales.  Although the whales love to breach, "spy-hop" and slap .... swimmers/snorklers are allowed to quietly enter the water when the whales are less active to experience stunning moments with the great giants in their own space.  Moorea, just next to the island of Tahiti, is one of the two popular spots in French Polynesia for whales. Rurutu, the main island in a chain of islands called the Astrals, 375 miles (600 kilometers) south of Tahiti, is exotically remote and delightfully removed from the "tourist" experience. We highly recommend an extension to your trip to the Tuamotus  ......  read more

And, in Rurutu, you have the distinct possibility of seeing far more than humpbacks.  Sightings are not uncommon of the following species: sperm whales, minke whales, sei whales, pilot whales, beaked whales, melon-headed whales.

Like the humpbacks in Tonganese waters, the groups of humpbacks that come to mate and bear their young here come from Antarctic waters and spend 3 – 4 months of the year as residents of the South Pacific.

The curious & playful calves spend time entertaining themselves as well as learning whale behavior from their mothers, while the adult males spend their time attracting the females in an effort to create next year's group of calves. You'll be overwhelmed as you observe ... whether from the boat or eye to eye with the whales in the water.

Read more about swim-with-whales programs around the world. 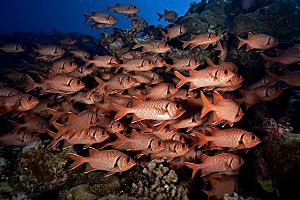 MARQUESAS ... HOME TO HORDES OF PELAGICS
As there are a handful of dive cruises per year in this region, so you'll find yourselves virtually alone with magnificent mantas, some measuring up to 16 feet across.  You'll also see eagle rays, scalloped hammerheads, silky sharks, grey reef sharks, white tip & black tip reef sharks .... even the occasional tiger shark.  In addition to the sharks, you find kingfish, tuna, napoleons, dolphins and swordfish.  To top it off, not far from Nuku Hiva resides a colony of several hundred Pygmy killer whales and the rarely seen melonheaded whales. At certain times of the year there are migrating whale sharks  ......  read more

Do note that the visibility is generally low due to the concentration of nutrients in the water ... but this is what brings in all of these incredible creatures.  Diving amongst the dramatic sea mounts, caves & walls ... in strong currents .... with hundreds of pelagics is a never-to-be-forgotten experience.

Paradisical French Polynesia lies in the South Pacific Ocean half way between Los Angeles and Sydney, Australia.    It is composed of 118 geographically dispersed islands & atolls stretching over more than 2,000 kilometres (1,200 miles) – only 67 of which are inhabited.   There are 5 island groups : the Society Islands, the Tuamotu Archipelago, the Gambier Islands, the Marquesas & the Austral Islands.   Each of these island groups offers something unique in terms of culture, geology and diving.