The 115-foot (35-meter) MV Carpe Diem offers 7 and 10-night cruises concentrating on the Central Atolls but offers a wide variety of itineraries with excursions to the north & south, also.

A word from Dom :  "Carpe Diem is sister ship to the Carpe Vita and Carpe Nova.  Always a fine choice but I particularly appreciate the trips she operates to the southern atolls.".....   Dominick Macan

ON BOARD CARPE DIEM

Carpe Diem has 3 decks plus a sundeck. On the very top is the 115 square-meter sun deck, which is partially covered & is used for both sunning and lounging.  The upper deck hosts the main dining area & bar, a reading area & library, studio with internet & business center facilities, plus an alfresco dining alternative.  You'll also find find the 2 large suites here.  Outside of the lounge area there is another sitting area in the shade with comfortable, cushioned chairs.

Diving is done from the dhoni, meaning plenty of extra room on board.  Carpe Diem offers a variety of European & International Cuisine – including Maldivian, Thai & Indian specialties. The wine menu features wines from around the world. 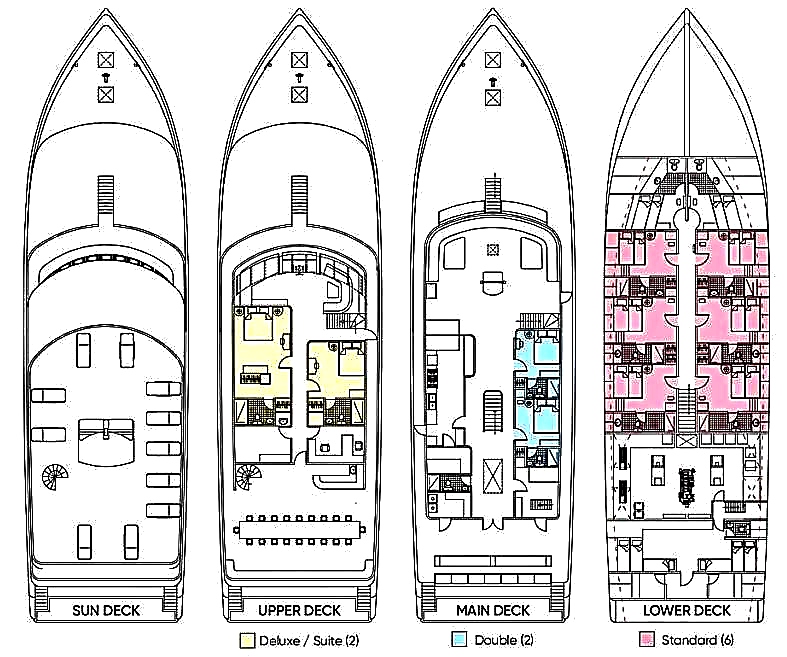 view the highlights of these trips ....... open|dest
The final itinerary is, of course, always dependent upon weather, sea conditions and where the best animal sightings are at any particular time of year

South Ari Atoll: popular for its population of whale sharks. In season you’re likely to have the opportunity to snorkel with one or more. But, whale sharks aren’t all there is. You’ll find caves and overhangs, more sharks … plus fusiliers, angelfish, tuna & jacks, large seafans, soft corals and an abundance of other marine life.

Lhaviyani Atoll: A favorite dive for many divers looking for an adrenalin rush, the Kuredu Express at his atoll is almost always like downhill racing … and sometimes too wild to dive at all. The currents bring in nutrients and smaller fish for the big guys, who also seem to like the ride. Large groups of grey reef sharks are common … as are giant napoleon wrasses, a giant grouper, big stingrays, turtles, eels, trevally, eagle rays and sometimes a group of mobulas.

Meemu: channels with currents bring excitement with good drift diving amongst lots of fish with some lovely, lush coral backdrop. A shallow manta cleaning station is one of the most popular dives here. In addition to mantas, you can expect all the Maldives characters, the jacks, Napoleons, groupers, snappers eagle rays, morays and reef sharks.

Thaa Atoll: known for both mantas and eagle rays and plenty of pelagic fish, there’s also a nice channel dive which often includes a few sharks, including occasionally some silvertips.

Foammulah: if you’re looking for sharky dives, you need look no further. Tiger sharks, thresher sharks, hammerheads and silky sharks can be found in this region … plus oceanic mantas. The currents can be wild, so, it’s strictly for advanced divers. If you’re in that category, this is thrilling stuff! There’s also a beautiful wall dive with more of the same characters and schools of pelagic fish.

Addu Atoll: this atoll offers a wonderful shark dive. Grey reef sharks and white tip reef sharks hang out on a sandy plateau and other species are often spotted in the blue. In addition to the sharks, you’ve got a manta cleaning station and a very popular wreck dive, the British Loyalty, an oil tanker was torpedoed in 1944 by a German U-boat. The body of the ship is covered with table coral, soft corals, gorgonians and black corals.

The Carpe Diem offers 7 and 10-night cruises. The cruises normally leave every Saturday but for 10-day cruises departure days may change.  Check in time is generally at 12.30 pm and you will be met at the airport by a representative of the liveaboard.  If you arrive early, you may wait at the airport or we can help you to make arrangements to use the facilities of the nearby airport hotel until check-in time for the boat.  Check out time will be latest by 8 am on the day of return.