The two identical vessels, Ying & Yang, are the largest of Maldives dive & spa options.  They each accommodate up to 40 guests in 10 cabins & 9 suites & dive the Best of Maldives route.

A word from Dom: "Very popular with divers travelling with a non-diving partner.  The yoga & spa aspect of these cruises is ideal for the non-diver who is looking for a week of pampering while divers will enjoy the classic highlights of Maldivian waters.  Yes, each vessel is like a small cruise ship, so a different experience for the average diver, but exceptionally well managed."  .... Dominick Macan

ON BOARD SCUBASPA YING & YANG

Scubaspa Ying & Yang were the dream of a diver and his physiotherapist wife who, together, designed the boats to offer something unique for travelers: a combination of serious spa & yoga alongside opportunities for daily diving.  The boats are especially well-conceived for couples who don't both dive

The popular top sun deck features immense space for sunbathing but also includes the secluded Thai massage area and the Jacuzzi.  Below that, on the upper deck, you'll find the outdoor spa and a variety of treatment rooms, plus an aqua-room, a gym (Yang only) and an outdoor bar.  On the main deck, you'll find the restaurant (with open windows, giving it an al fresco ambiance)  ... plus 6 of the suites.  You'll also access the large swim platform on this deck.  On the lower deck, are located the remaining 10 cabins and one suite,

Three buffet-style meals are offered daily but there's also an a la carte menu  ... ranging from roast rack of lamb to grilled Atlantic salmon and an authentic sushi bar ...  all complemented by carefully selected wines and champagnes.  Don't hesitate to let us know your dietary needs.

Scubaspa offers 3 package options:  exclusively spa .... exclusively diving ... or a combination of the two.  You'll also find fishing rods, paddle boards and kayaks at your disposal ... plus beach barbecues; laundry service and Wifi wherever there is connection.   Diving, as will most Maldives liveaboards, is done from a dhoni where all your equipment will be housed. 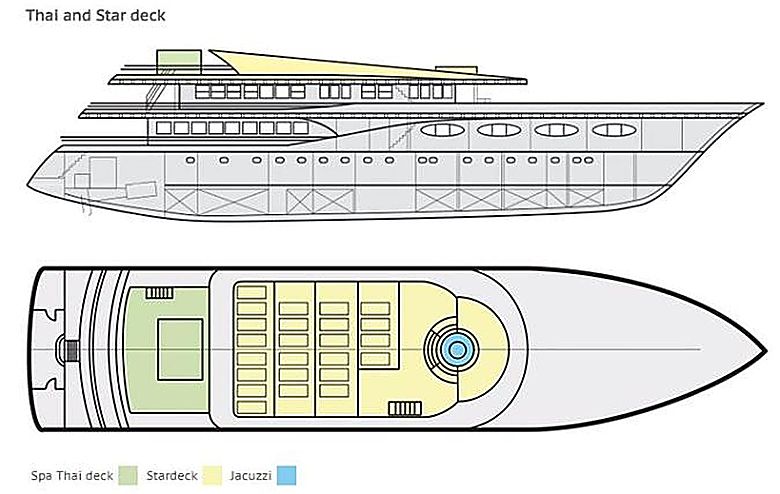 Scubaspa Ying and Yang focus on a Best of Maldives itinerary encompassing North and South Ari Atolls, North and South Male, Vaavu Atoll and Rasdhoo, although itineraries change from time to time.  Occasionally, you'll find a Northern Atolls trip on the schedule.

BEST OF MALDIVES - Scubaspa Ying spends the vast majority of her time around Ari Atoll, Male Atoll, Vaavu and Rasdhoo.  The inclusion of Vavaau and Rasdhoo is a slightly different route from most Best of Maldives trips.  Your itinerary will most likely take you to two to four of the following:

South Ari Atoll: popular for its population of whale sharks. In season you’re likely to have the opportunity to snorkel with one or more. But, whale sharks aren’t all there is. You’ll find caves and overhangs, more sharks … plus fusiliers, angelfish, tuna & jacks, large seafans, soft corals and an abundance of other marine life.

NORTHERN ATOLLS -  you are likely to dive sites in most or all of the following:

Lhaviyani Atoll:  some rousing currents here, which bring in nutrients and smaller fish for the big guys, who also seem to like the ride. Large groups of grey reef sharks are common … as are giant napoleon wrasses, a giant grouper, big stingrays, turtles, eels, trevally, eagle rays and sometimes a group of mobulas.

Noonu Atoll: while much of the diving here is less challenging than some of the other atolls there are some good advanced dives, too. And, all levels of divers should have the opportunity for sighting plenty of sharks: grey reef sharks, nurse sharks and white tip reef sharks. There are, of course, the ubiquitous Maldivian stingrays. Keep your eyes peeled for red-tooth triggerfish as they’re often spotted around this atoll along with other reef fish. There’s a nice bit of macro photography to be had here, too.

International flights should be booked to Male.  If you arrive on the day the cruise departs your transfer from the airport to the boat will be included.

Check-in:  Embarkation starts at 14:00 on Saturdays, guests are requested to book their flight tickets accordingly.  Please note Saturdays are solely dedicated to collecting all guests from the airport thus neither sailing nor activities like dive, snorkelling or spa treatments are scheduled or organized.

Check-out: There are two standard airport transfers scheduled for Saturday on 7-night holiday - at 7 AM at 8.45 AM. The dive boat will transfer all guests to Velana International Airport near capital Male’.