A note from Dom  ... Mystical Malpelo

Simply stated, this is a WOW destination.   "Electrifying" is as close as I come to finding a word describing my feeling about diving here.   My heart pounds as if it's likely to jump out of my chest as I'm surrounded by the madcap parade of enormous sharks.  When conditions are right, you can see more sharks amassed together here than in any other place on the planet.  The thrills are limitless for experienced divers.  .... read more ...

My first experience at Malpelo was on the Argo, part of the Undersea Hunter group of liveaboards, which used to regularly visit Malpelo Island in combination with cruises to Cocos Island.  Due to the long and often arduous crossing between Cocos and Malpelo, the Undersea Hunter boats are now concentrating solely on Cocos expeditions, having left the Malpelo field open to other enterprising liveaboards.

New Colombian government regulations brought in during 2017 meant that the two boats running from Panama, Yemaya and Inula, would no longer be able to sail from Panama to Malpelo ... but the newly reburbished Ferox, an ice-classed vessel, has stepped in to fill their shoes.  With a highly experienced captain to steer her, this great hulk of a ship is a perfect match for the adventure diving of Malpelo.  I highly recommend the experience !

If you have ANY questions, I'm an email away and will respond to your request immediately.     Cheers, Dom

This is a wild & spectacular marine environment, renowned for its abundance and quantity of schooling shark and big marine animal encounters.  The island itself, is forbidding ... standing strong against the formidable elements in the eastern Pacific. When Malpelo diving is at its best, only Cocos & Galapagos can roughly compare with the numbers of sharks and big fish in the water.

You have schools of hammerheads (up to 300 animals in one school) and silky sharks, plus a variety of other shark species, such as the Galapagos shark, whale shark and white-tip shark, together with huge schools of other big fish species - giant schools of angelfish, Creole fish, jacks, tuna, and occasionally a sailfish.

You often find a passing whale shark and even humpback whales and blue whales. The rare, deep water ragged-tooth shark also can be encountered in the colder depths

Malpelo is located at a site of convergence of different major currents in the Pacific Ocean: the cold Humboldt current (south-north), the warm North-Equatorial (west-east) counter-current, and from January to March, the cold cyclonic Panama current (north-south).  It is these conflicting cold currents and warm equatorial currents which create conditions ripe for a sea rich in nutrients and therefore also rich in marine species.

Hammerhead sharks can be seen all year round but due to thermoclines in shallower depths they tend to be more numerous from December to March. Also, in the first three months of the year the temperature below the thermocline is colder and the smalltooth sand tiger shark ascends to depths accessible for recreational divers.

Silky sharks are more prevalent in the months of April to September. In addition to the residing eagle rays, mobula and the majestic manta rays can be experienced in the months of May and June.

In April and May divers are usually lucky enough to see great hunting expeditions in which a variety of the animals chase baitballs of fish.  June is the month of the arrival of whale sharks which stay along with the Galapagos sharks until September.

Warmer water temperatures and thermoclines in deeper water are found from June to November.

A GLIMPSE OF MALPELO'S TREASURES 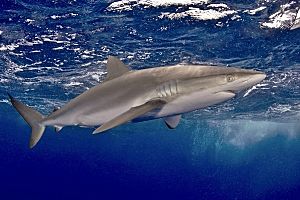 Malpelo diving
This area has one of the biggest hammerhead shark populations in the world, in addition to silkies, white tips, whale sharks, plus countless schools of fish, several ray species and the giant manta.  There are approximately 20 dive spots at Malpelo and it's a paradise for shark lovers!  You'll find plenty of other amazing wildlife: hundreds of morays swimming in open water near the walls, schools of barracuda, turtles, dolphins, schools of mantas and spotted eagle rays, whale sharks, white-tip sharks, bull sharks, schools of silky sharks, galapagos sharks, amberjacks, tunas, snappers, groupers, huge schools of jack fish and those amazing free-swimming eels.... read more ...

But, what makes Malpelo unique in the world is the incredible concentration of hammerheads.  They swim in schools of hundreds are usually visible between 10 and 30 meters deep. Swimming peacefully from morning to night, they seem indifferent to what happens around them.  Diving with them is a once in a lifetime experience!

Malpelo, a giant in terms of the marine world, is just a tiny island lying in the East Pacific Ocean, located roughly 500 kilometers (310 miles) west of Colombia.   It’s the only peak which extends above the waterline from an ancient volcanic ridge & is uninhabited except for a small military post.   The Malpelo Nature Reserve, a plant & wildlife sanctuary, surrounds the island. Also, in 2006, Malpelo was declared a UNESCO World Heritage Site.