Papua New Guinea . . . the name conjures up visions of an infinitely remote, mysterious & untamed island, imbued with a history of ancient & primitive tribal customs that lasted well into the modern era ..... Before I even thought about diving in Papua, I was attracted by its wild & alluring reputation.  I wanted to experience its wonders & bask in its mystery.  I was aching for this remote journey and was blown away on my first trip .... surrounded by the natural beauty of the land and the unparalled glory of the marine world.  ,,, read more ...

The corals truly are as pristine & vibrant as the photos you've seen;  and there really are sites with such a plenitude of pelagics that it makes your blood boil to swim amongst them;  then again, there honestly are countless sites which provide macro photography opportunities that simply cannot be described .... creeping, crawling, floating critters beyond all imagination.

Plus, there is so much space & there are so few dive boats, that you just won't ever have to face hundreds of other divers exploring "your" dive site!   Two dive boats at the same site at the same time is virtually unheard of in Papua New Guinea.  So you really can have the feeling of being an explorer in a lost region of the planet while you're finning along in this underwater wonderland.

On top of which, I can tell you from personal experience that the boats & resorts here all offer first class diving .... although their amenities differ and taking advice before travelling here is recommended.

Check out what we have to tell you on our PNG page and when you're ready to hear more, I'm an email away or a phone call away and will respond to your request with any additional details that you wish.     Cheers, Dom

PNG, a Coral Triangle nation, is composed of small islands, atolls and barrier reefs unlike anything you've ever seen.  Photographers can't get enough of this lush sub-marine garden.  Most of the best sites lie on the south-eastern peninsula of the mainland island . . . and to the east of the mainland around the islands of New Ireland & New Britain. (see map)

While not as vast in terms of territory as Indonesia or the Philippines or Micronesia, PNG is certainly just as varied in terms of marine life ... and also a country which we dive by region based on our marine preferences.  In brief, Kimbe Bay to Rabaul offers what are probably the most staggering corals on the planet ... the size, the shapes, the colors, the variety.  Rabaul itself is a treasure trove of WWII wrecks.  Milne Bay, while it has something of everything, is propably best known for its outrageously special muck diving ... critters which stretch the imagination of all who see them.  Loloata offers more of those jaw-dropping corals ... and Tufi has everything a diver could want plus its amazing fjord geography.

These are simply the highlights .... You can read below, in detail, the descriptions of all of PNG's diving areas.

One of the few dive destinations in the world where the land-based diving is as good as the liveaboard diving, PNG offers a fantastic selection of dive resorts to choose from.

Which option should you choose?

Our feeling is that if you've taken the pains to go all the way to this remote paradise, you should do both.  A few days at a resort, before or after a liveaboard cruise, is unquestionably the perfect solution and will guarantee both unforgettable diving and a flavor of true New Guinea spirit.

For the adventurous traveller, PNG offers much more than diving, of course.  Its pristine rain-forests hide species of animals still unknown to scientists & the land is equally rich in terms of culture, with hundreds of indigenous, traditional communities, many of which still have little or no contact with the outside world. 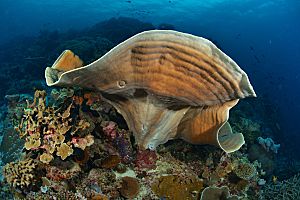 Kimbe Bay to Rabaul  ...  some of the world's finest corals & critters ... plus wrecks
Kimbe Bay hosts at least 200 dive sites & is reported to have nearly 70% of all Indo-Pacific marine species in its waters.   Yes, just in the bay itself!  Large schools of reef fish, spectacular sea fans, endless stunning soft & hard coral gardens harboring the world’s most amazing creatures .... plus reef sharks & pelagic fish.  New Britain Island has two world-famous dive areas. Kimbe Bay is a photographer's dream - with an extreme level of diversity and spectacular corals, while Rabaul is most famous for its WWII wrecks. .... read more ...

Every year this regions hosts photographers who produce prize-winning shots from the surrounding waters. It's a rare thing to attend an underwater photography competition that doesn't include a prize winning photo or film shot in Kimbe Bay.

Most often, photographers spend at least a part of their time at the warm & welcoming Walindi Plantation Resort, with its remarkable house reef, coral gardens and critters . . . . and easy access to shallow fringing reefs, plunging walls and pinnacles.

We cannot possibly say enough good things - about Walindi . . . and about the diving in the immediate area.  And, based at Walindi is one of Dom's all-time personal favorite liveaboards, FeBrina and her new sister ship, Oceania. 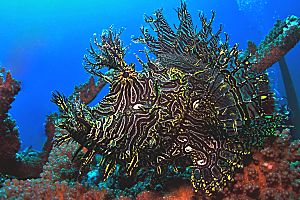 Milne Bay  ... muck diving mania ... plus plenty of pelagics
Situated at the south-eastern tip of the mainland, Milne Bay likes to claim that the term "muck diving" actually originated here! And while it's true that "muck-diving extraordinaire" exists here, you won't want to limit your diving only to that genre, as there is so much more to explore.  You can choose liveaboard or land-based diving - and regardless of your choice you'll find those critters, sure, but also incredible corals, walls, plenty of pelagics - including Mantas - and some fabulous wreck diving! ... read more ...

Tawali Resort can be your home base here for land-based diving . . . and the Chertan liveaboard is based at Tawali and will take you further afield. Also, the Golden Dawn does Milne Bay itineraries at certain times of the year.

The area can be dived year round, with November to February bringing the very best diving conditions and May to September bringing the heaviest rainfall. 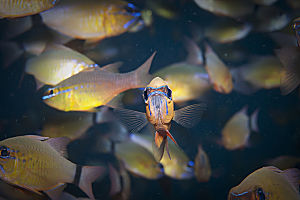 Loloata Island  ... corals, critters & fish
With some of the world's finest coral reefs just off its shores, Loloata affords an opportunity to encounter much of Papua New Guinea's extraordinary marine life. Underwater photographers love the array of fish, corals and critters just minutes away from the dock.  Not far from Port Moresby, the capital of PNG, lie some world-class dive sites which are included on some of the liveaboard trips and can be accessed on day-dive trips from lovely Loloata Private Island Resort. ... read more ...

While Loloata's critter reputation is undeniable, you mustn't think that critters is all there is! The waters of Bootless Bay contain substantial wrecks where the tubastrea, soft corals and fans grow in a vast range of colors. On these wrecks you'll see anthias and glass fish, long-nose hawkfish and pipefish and masses of pelagics.

Diving here is simply as good as it gets. 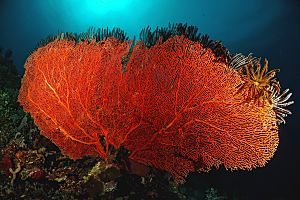 Tufi ...  a little bit of everything including wrecks
The Tufi region of PNG is a very special place indeed. With long peninsulas stretching out into the sea, Tufi is known as PNG's fjordland.  Home to beautiful reefs, plenty of pelagic action, macro critters galore, a few good wrecks and great visibility . . . Tufi easily lives up to the rest of the diving in PNG!  The relaxed & inviting Tufi Resort makes a perfect base for diving this fjordland. Immediately offshore you find great muck diving, for starters - with lots of rubble from war-time hosting ghost pipefish & nudibranchs, frogfish amongst tons of other critters. ... read more ...

When conditions are right, very experienced divers may have the opportunity to do a decompression dive to explore 2 very complete American PT Cruisers, sunk in 1942. 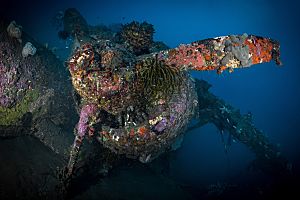 Kavieng is a small, friendly town on the northern tip of New Ireland - which saw intense fighting between the Japanese & Allied forces near the end of the Second World War .

Our preferred operators here are Lissenung Island Resort and Golden Dawn liveaboard, which offers Kavieng itineraries at certain times of the year.

Golden Dawn is currently accepting full charters only ... so please contact us if this possiblity is of interest to your group. 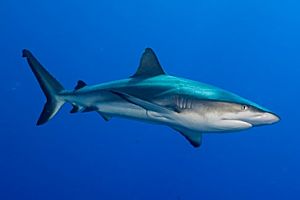 Eastern Fields  ... rarely visited magnificent reefs & plenty of pelagics
These reefs, rising from enormous marine depths, are located beyond the scope of the cyclones which pass through similar systems to the south, meaning that they have weathered the ages in an un-battered condition.  Lying to the south of Port Moresby and at the northern boundary of Australia's Coral Sea is the area known as the Eastern Fields, a fascinating system of oceanic reefs. ... read more ...

Don't mistake that fact to mean these are calm seas. In fact, the submerged reefs here can only be dived for a couple of months during the year, due to sea conditions. And, as far as we know, the only Captain who knows the territory well enough to navigate it is Craig Dewit of the Golden Dawn.

Should you be lucky enough to be one of the elite group of divers to dive the Eastern Fields, you will find massive drop-offs in clear blue waters, populated with unbelievable corals and nutrient-rich currents that bring marine species of all sizes and persuasions! 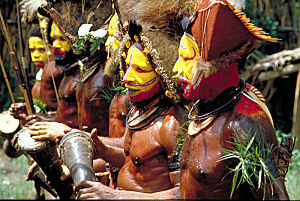 The Highlands and Cultural Shows  ...  cultural adventure
Papua New Guinea is well known to travelers for its colorful & enchanting cultural shows ... the largest of which occur in August and September. Should you be planning a diving trip in those months we strongly recommend extending your trip to include one of these thrilling programs.  PNG is comprised of a startling number of tribes, all with different beliefs, traditions and rituals. A wide variety of ceremonies - which include dance & « sing-sings » are designed to celebrate marriages, births, deaths and passage to adulthood. ... read more ...

Action, color & creativity are the driving forces and visitors who attend the shows are in for the treat of their lives. The tribe members wear body paint, face tatoos, fantastic costumes & headdresses.  The dancers move in frenzied rhythms to the ever-present beat of the drums.

The most renowned of the festivals are the Mount Hagen (August) and Goroka (September). Tribes compete with one another and participants & observers alike come from all over Papua New Guinea and all over the world .... so reservations need to be made well in advance.

Papua New Guinea is simply one of the most captivating places on the planet.   Geographically north of Australia, it occupies the eastern half of the island of New Guinea, at the far eastern edge of what we know as Indonesia.  The western half of the island is home to two of Indonesia's provinces, Papua & West Papua.   Papua New Guinea is one of the most culturally diverse countries in the world & occupies one of the least explored landscapes on the planet where new species - land & sea - are being discovered each year.