The NEW 27-meter (88-foot) catamaran MV Oceania sleeps up to 16 guests. Her itineraries include the classic PNG hot-spots of Fathers Reefs, Witu Islands and the inimitable Kimbe Bay.

A word from Dom :  "Max Benjamin of Walindi Plantation and Captain Alan Raabe of FeBrina fame, purchased a new catamaran to give more divers the option of exploring the wonders of PNG.  The new Oceania is a gem. They stripped her down to the bare shell and completely rebuilt her as a state of the art platform for diving. This team knows the remote areas of PNG better than anyone and with the superior space and comfort afforded by this stylish catamaran, you'll feel you've truly arrived in Paradise."..... Dominick Macan

Oceania has undergone an extensive refit and the result is a fresh and modern liveaboard, but still comfortable and designed with the serious diver in mind. The large, partially covered top deck is a perfect venue for sunbathing, sleeping and slight-seeing as you glide through the luscious tropical islands of PNG.  On the bridge deck, guest areas include a tastefully appointed salon and dining area with all the technology you can desire for evening entertainment.. The dive deck, at the stern end of the main deck, offers individual storage areas, camera work area and a dive deck bathroom and shower. Diving is both from the water level duckboard and from the specially fitted dive tender.  The large, comfy cabins are all on the main deck level.

Meals on board Oceania are prepared using as much local, fresh produce as is available at the time. A continental breakfast is available before the first dive, then hot breakfast, a mid-morning snack, then lunch buffet style. Dinner is a la carte and is generally 'home style cooking' using locally produced meats and freshly caught fish where possible.  Fresh fruit is available all day long from the saloon and the fridges are stocked with a range of soft drinks, juices and SP beers. A limited selection of red and white wines are served on board. Special dietary requirements are possible although may be limited by what is available in PNG.

MV Oceania runs different itineraries during the year to suit the weather patterns of each season.  The "Signature Itinerary" covers at least two the three most popular diving areas of Kimbe Bay, Witu Islands and Fathers Reefs.  You will be able to choose from 9 & 10-night Signature itineraries in the ‘peak' weather months:  mid-September, October and November ... then April, May and June.

View the highlights of these trips and an itinerary map....... open
The final itinerary is, of course, always dependent upon weather, sea conditions and where the best animal sightings are at any particular time of year

Kimbe Bay and the nearby reefs and composed of ridges, walls, gentle slopes, sheer drops, swim-throughs, caves, ledges and overhangs. Divers revel in the brilliantly colored coral bommies, the huge gorgonian fas and red whip corals, the impressive staghorn corals, brain corals, large colonies of leather corals & black coral, as well as the big barrel sponges and elephant ear sponges. Many of these are adorned with colorful crinoids. Also, sea anemones and a variety of anemone fish abound.

Hiding in this superb variety of coral and sponge life, you’ll find a wide variety of critters such as crabs, scorpion fish, nudibranchs, flatworms, feather duster worms, leafy scorpion fish, mandarin fish, seahorses … and darting all around you and the reefs will be bat fish, unicorn fish, Moorish idols, parrot fish, damsel fish, fusiliers, triggerfish and purple anthias. Of course, the small stuff brings in the larger fish, so you’ll see large schools of batfish, rainbow-runner, dogtooth tuna, big-eye trevally and barracuda. Then, needless to say, the ocean hunters are attracted, so get ready for sightings of gray reef sharks, white tip reef sharks and hammerheads.

Rabaul is known topside for WWII history – but what really makes Rabaul shine is the areas jetty dives. Macro lovers will delight at the sandy bottom dives featuring a myriad of different species of frogfish, harlequin ghost pipefish, bumblebee shrimp, harlequin shrimp, mandarin fish, coconut octopus, boxer crabs, leaf scorpion fish and nudibranchs - just to name a few.  On the outer reefs the topography is beautiful and unique, formed over many years of volcanic activity. Rabaul Harbour itself was formed when an ancient volcanic caldera partially collapsed thousands of years ago. The harbor is surrounded by many small volcanoes, most of which are dormant or extinct. That being said, Tarvuvur remains active today and is breathtaking when viewed from a distance at sunset.

Rabaul Mask Festival is held in July each year. Oceania endeavors to operate two trips to coincide with this festival. One trip departs Walindi and finishes in Rabaul, arriving at the start of the festival. And the second trip departs from Rabaul at the end of the festival and returns to Walindi. As trips are scheduled well in advance, occasionally the trip dates don't match. Talk with us about how the dates fall during the year you're interested in going.

Situated at the south-eastern tip of the mainland, Milne Bay likes to claim that the term "muck diving" actually originated here!  You can expect blue ribbon eels, cuttlefish, lion fish, a huge variety of nudibranchs, manta shrimps, mandarin fish, frog fish, sea horses, ghost pipe fish, cockatoo wasp fish and more.   And while it's true that "muck-diving extraordinaire" exists in this bay, you won't want to limit your diving only to that genre, as there is so much more to explore.  You'll find those critters, sure, but also incredible corals, walls, plenty of pelagics - including mantas & hammerheads - and some fabulous wreck diving! 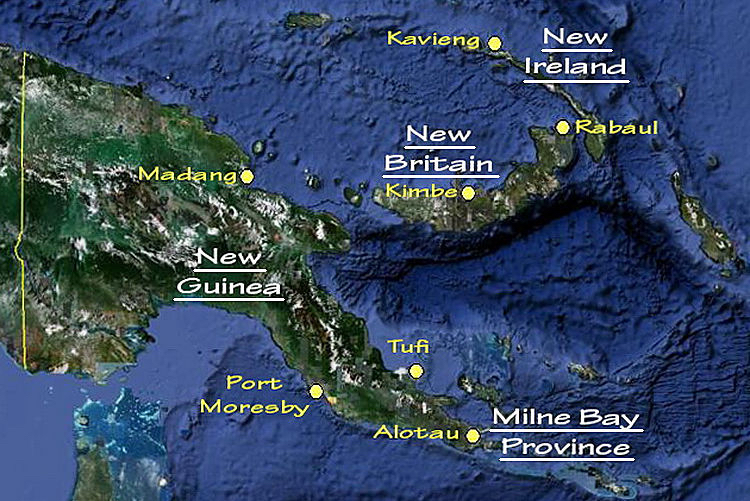 The international airport in Papua New Guinea (Jackson's airport) is located in the capital city, Port Moresby (POM). To get to Walindi Resort, where Oceania will depart from, you will fly from Port Moresby to Hoskins (HKN) airport, also known as Kimbe airport. There are daily flights from Port Moresby with either Air Niugini or Airlines of PNG.  If you are connecting through Port Moresby on the same day, you'll probably want to book both international and domestic flight sectors with the same carrier.   From Hoskins airport, it is approx. 50 minute drive to Walindi Resort and airport transfers are arranged at time of booking.

A driver from Walindi Resort will be waiting for you at the airport and will transfer you to the resort.   Departure times for Oceania vary based on season and itinerary.  We'll inform you at the time of booking.  Return transfers upon disembarking will also be arranged by Walindi.