A word from Dom:  ""All three "Blue" boats in the Red Sea sport classic but modest, informal design, plenty of room & light, lots of leisure space inside & out, good food ... and excellent operation.  What more can I say? Always a good choice."   ... Dominick Macan

ON BOARD BLUE MELODY

Blue Melody is a good choice for both diving and holiday atmosphere.  A huge sun deck with seating for everyone occupies the top deck while the upper deck has a stern-end exterior lounge with tables, extra-sized deck chairs, a bar ... and the option to be covered or uncovered.

The exterior lounge leads directly into a comfy, air-conditioned lounge in classic teak, while a larger interior lounge & bar with state-of- the-art entertainment system can be found on the main deck (see "mid-deck" on the deck plan below). The well-appointed dining area is located next to the main deck lounge.

Two double cabins are located just forward of the upper deck lounge and one double is on the main deck, forward of the galley.  Located on the stern of this level is the dive deck.  On the lower deck, you'll find the remaining 10 guest cabins. 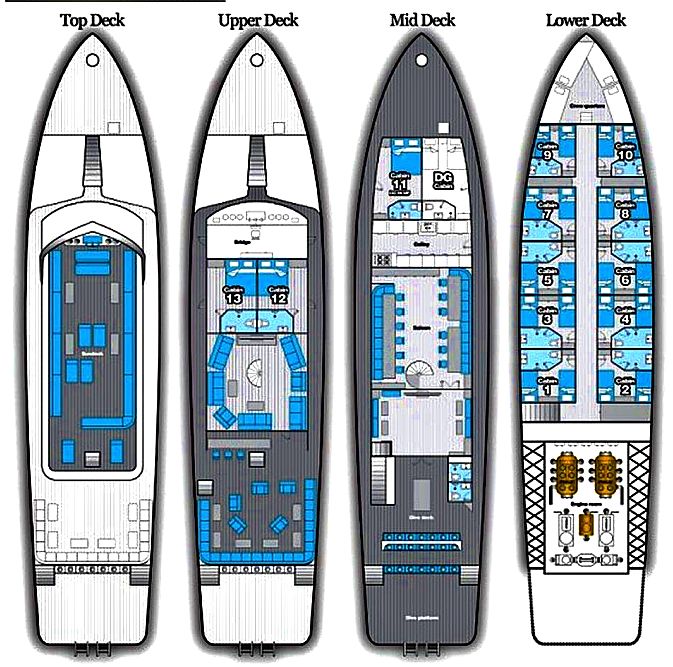 The Blue Melody itinerary selection is widely varied and covers the northern Red Sea, most of her itineraries leaving from & returning to Hurgada.  You'll find special wreck diving weeks and occasionally a special shark trip.

View the highlights of these trips....... open
The final itinerary is, of course, always dependent upon weather, sea conditions and where the best animal sightings are at any particular time of year

Dive sites vary, with something for everyone on most itineraries. Currents are the norm in many spots so on several itineraries it is recommended that divers have experience beyond beginner level to ensure maximum enjoyment. Always check with us for the most suitable itinerary for your experience and certification.

On a typical day there are up to 4 day dives, however the 4th day dive may be substituted for a night dive when the boat is anchored by a reef.  A 7-night itinerary provides for between 18-20 dives; during a 10-night itinerary up to 30 dives will be possible.

Best of Wrecks  Likely to include several of these: Abu Nuhas, Thistlegorm, Ghiannis D, Carnatic, Rosalie Moller, Salem Express and Al Kafain, Big Brother Island where the wrecks of Aida and Numidia are located

Depending on your itinerary, the time of year ... and weather conditions at the time of travel, you can expect to visit some of the following:

Safaga stunning drop offs, shallow coral gardens and interesting wrecks - the most famous of which is of the Salem Express, a large ferry, which sank in 1991 with massive loss of life ... more wrecks, corals and some great critters

Daedalus some of the most amazing dives in the Red Sea ... with sheer walls covered in over-grown hard coral formations and a variety of reef fish, plusoceanic white tip, grey reef and thresher sharks are often sighted.  Most famous for its scalloped hammerhead sharks.

Fury Shoal Each dive site has its particularity from dolphins, to stunning hard coral formations and not forgetting the two little wrecks “Tug Boat” and the “Yacht”.

Elphingstone north and south plateaus covered in hard and soft corals ...unpredictable and exciting this truly is an awesome reef where hammerhead sharks are regularly spotted in the summer and oceanic whitetip sharks often congregate in large numbers during late autumn.

St John's drop-offs, tunnels, and stunning hard coral formations. The sun filters through the tunnels, a delight for photographers. The great variety in colours of the soft coral and marine life guarantees wonderful dive experiences. With any luck, dolphins or pelagic fish will join you on your dive

Ras Mohamed Shark & Yolanda Reefs are joined by a vertical wall dropping into the abyss. At Shark Reef,you to drift along the rich with colorful wall. At Yolanda Reef you will come upon the scattered remains of the wreck ‘Yolanda’ complete with its cargo of toilets and baths. The whole of this area is big fish territory so keep an eye on the blue!

SS Thistlegorm this English cargo ship was bombed by the Germans in October 1941 while transporting supplies destined for the British in Alexandria (armoured vehicles, motorcycles, jeeps, trucks, rolling stock, airplane parts, stacks of rifles, radio equipment, munitions, and a plentiful supply of wellington boots). Now she is an artificial reef and home to an enormous variety of marine life.

Rosalie Moeller Rosalie Moeller, sister ship to SS Thistlegorm, was also bombed and sunk in October 1941 and now lies in 180 ft/55 m on a sandy bottom. Hard and soft corals are covering the hull and a variety of marine (barracudas, tunas, jacks, trevallies, glass fish, scorpion fish and groupers) call her “home”.

Abu Nuhas  known as the ‘Ship’s Graveyard’, this reef is dangerously close to the busy shipping lanes of the Gulf of Suez and has claimed more ships than any other in the area.  Wrecks here include the Ghiannis D, Carnatic, Tile and Lentil.

Numidia a large cargo steamer which sank in 1901 and now lies on the tip of the island between 10 and 80 meters covered in soft corals and frequented by large pelagic predators.

Aida this small wreck used to be a lighthouse authority supply vessel. She sank in 1957 in bad weather and landed in 30-65m deep water.

We recommend that you book your international flight to and from Hurghada International airport (HRG) or Marsa Alam International airport (RMF), depending on your departure port. Both airports are served by many airlines and charter companies from all over the world. A representative of the Blue Horizon will meet guests at the airport and escort them to the yacht.

Please note that these times may vary depending on the itinerary so please check your cruise confirmation carefully. Depending on your onward plans, you can either transfer directly to the airport or check into a hotel to enjoy the Egyptian hospitality a little longer.