Yes, I know.  I use a lot of superlatives when I talk & write.  But, those of you who have experienced the thrill of Socorro will understand my enthusiasm.  The Revillagigedo Islands present interaction with Giant Giant Mantas unlike anywhere else.  These animals, which often exceed a 20-foot wingspan, approach divers with absolutely no fear ..... in fact, it often seems they exude great joy at welcoming the visitors to their environment.  ....   read more

The effect on divers is always one of intense emotion and the scuba diving at Socorro, in my opinion, can rightfully claim its place amongst the world's absolute top pelagic destinations ... particularly when you add in a variety of shark species, including occasional whale sharks ... and the migrating humpback whales in late winter, early spring.

No less intense is the cage diving experience with Great Whites at the Island of Guadalupe where you may find yourself virtually nose-to-nose with up to three 17-foot Great Whites who will stay with you for hours. Yep. Thank goodness for those cages!   There are several destinations for Great Whites around the world, but the extraordinary visibility & the intense blue water make this one unique.

Check it all out here on our Socorro & Guadalupe page and when you're ready to hear more, I'm an email away and will respond to your request with any additional details that you wish.    Cheers, Dom

If you love adventure diving .... if you adore ocean pelagics .... if you've dreamed of diving within inches of a Giant Manta or staring down a Great White through the bars of a solid cage, Mexico's Socorro and Guadalupe Islands should absolutely figure somewhere near the top of the list of your most desired diving destinations.

The visibility in these locations is so fabulous (often 100 feet or more), the immense number of animals so staggering and the photo ops so overwhelming that we have to say you'll have experiences here you can never have anywhere else on the planet.

Some of the Giant Mantas attain an implausible wing span of up to 22 feet (7 meters) across, though most are a bit smaller than that, and it is not unusual to be surrounded by as many as 5 to 10 individuals of this size.   You've probably heard that the mantas seek out interaction with divers and choose to stick around as long as there are divers in the water. Their curiosity seems to draw them to the divers and apparently they just like to see what the strange rubber-clad creatures are doing in their world !

It's been noticed in the recent past that the bottlenose dolphins have adopted a similar interaction style so you will hopefully have the opportunity to experience this also.

SEASONS IN THE SUN .... SOCORRO OR GUADALUPE?

Also, it's important to note that in the Revillagigedo Islands, the wildlife varies by season.

November to December is generally the perfect time for dolphins, giant mantas and 10 different species of sharks – including whale sharks. This is also the time of year for the warmest water temps.

Moving into January and the early spring months, you still have the big hitters – the mantas & dolphins – but you also get humpback whales and it's the only place on the planet we know of where you can actually scuba dive with them versus swimming or snorkling.

As the Socorro season finishes, from May to July, the excitement is due to the bait balls which attract all the various species (except the humpbacks) and the waters are a frenzy of hungry pelagics !  At this point, the season opens in Guadalupe and it's time to take your place in the viewing station for an eye-to-eye chat with a Great White shark or two .....

Probably needless to say, liveaboards are the only way to go for truly great diving in both of these locations.

AND WHAT ABOUT THE HUMPBACKS?

Just after every New Year, Humpback Whales arrive in the Socorro Islands in an annual migration from the cooler waters of Alaska and Canada.   Hundreds of them!  Their migration is an epic journey through open ocean and thousands of miles, and yet each year they find the small islands of the Revillagigedos Archipelago (Socorro).

You can see the magnificent Humpbacks during your dives at Socorro from January through March.   This is not a dedicated swim with the whales program ... but as the waters at this time of year are filled with migrating whales, the likelihood of meeting one or more while you're in the water is very strong.

Twice a year, when the boats reposition from one destination to the other, you have the opportunity to join a trip which visits both Socorro & Guadalupe.  These fill quickly ... so, don't hesitate to let us know well in advance if it takes your fancy ! 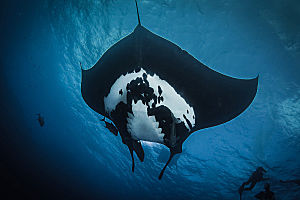 SOCORRO ... DANCE WITH MANTAS, CAVORT WITH DOLPHINS
You'll dodge seven different species of sharks and thrill to an occasional lucky interaction (December to March) with the migrating humpback whale population.  Listen closely & you may hear them singing.  (It's reported that there are roughly 1200 individuals at this time of year.)  In the autumn, whale sharks are likely visitors.  Late November to April is the Socorro season.  Giant Mantas, for unknown reasons, seemingly can't wait to initiate interaction with scuba divers!  It's a highly charged emotional experience.    ... continue reading ...

In recent years, the dolphins have taken up the behavior of the mantas, in terms of human interaction and you'll find them delightfully playful.  Seven species of sharks, including silky, Galapagos, silver tip, hammerheads and white tip reef sharks, not to mention tiger sharks on occasion and whale sharks in season are in the area. The hammerheads, by the way, are there all year, but from April to June you find really big schools of them for an added thrill.

To top it all off, you will certainly see plenty of lovely reef fish, huge swirls of jacks, wahoo, barracuda & giant dogtooth tuna, handsome octopus, copious quantities of turtles and scorpion fish hiding in crevices. Even the occasional marlin can be sighted.

Do note that these are largely migratory animals and don't appear on cue at the dive sites! So, you may find some dives without a lot of action while others will leave your head spinning. It's part of the adventure.

Roca Partida, which is included in Socorro itineraries, is a little rock out in the middle of nowhere. Part of the Revillagigedo Islands, it lies about 70 miles west of Socorro and 85 miles from San Benedicto Island.

"The Boiler" at San Benedicto is world-renowned for the up-close and personal encounters divers experience with the Giant Pacific manta ray which can grow to a wingspan of over twenty feet, yet they are gentle giants. Mantas commonly greet divers upon their arrival and stay as long as there are divers around.

The mantas are only some of the large animals seen at San Benedicto. At "The Canyon" divers have spotted schooling hammerhead sharks, Galapagos sharks, silky sharks, duskies, white tips, dolphins and even an occasional humpback whale or whale shark. 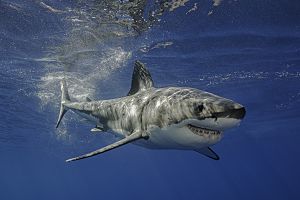 GUADALUPE & SAN BENITOS ... GO NOSE TO NOSE WITH A GREAT WHITE
This is the Mecca of Great White cage diving in the northern hemisphere ... and is probably is the best in the world due to its fabulous visibility and multitudes of Great Whites from August thru October.  Certified divers can descend to roughly 30 feet in the submersible cages to observe the Great Whites in their element. The sharks tend to be curious and will come up to the cage, often placing themselves pretty well nose-to-nose with the divers in the cage!   But, you've got highly trained dive-masters with you and plenty of safety equipment, so you can "relax" and enjoy this daunting moment as if it were a stroll on the beach. Well. Metaphorically speaking ..... continue reading

The liveaboards here make every effort to ensure that you can be in the water with the sharks as often as you like during the day. There will be other enthusiastic divers on your cruise who generally are seeking as much water time as you are .... but the organization runs smoothly and everyone gets equal opportunity – and lots of it!

From time to time, a trip is scheduled to include San Benitos Island where you dive in the giant kelp forests with delightfully playful sea lions.

The kelp forests are like underwater rainforests brimming with life.  You have abundant seals and sea lions …. plus large numbers of sub-tropical fish … and this regions is home to many sharks, guitar rays, lobsters, abalone, wahoo and tuna …. and the endemic orange Garibaldi.

Check our availability list for the next scheduled trip.

Recently named a World Heritage Site by UNESCO, the Revillagigedo Islands of Mexico, which include Socorro Island, are situated 600 kilometers (375 miles) off the west coast of Mexico, directly south of the Baja Peninsula.   Socorro's three sister islands are: San Benedicto, Roca Partida & Clarion.   Socorro, an active volcano, rises dramatically out of the sea.   Inhabitants include plenty of birds & other wildlife plus a small naval station.  Guadalupe Island lies 241 kilometres (150 miles) off the west coast of Baja California.