In 1989, MV Bilikiki sailed as the first full-service "luxury" live aboard dive vessel in the Solomon Islands.  She has 7 to 14-night world-class diving itineraries & she offers spectacular village visits.

A word from Dom:  "Bilikiki is a grand classic.  She offers the highest standard of diving, comfy accommodation & top-notch cuisine.  Not luxury standard but excellent nonetheless.  My time on the boat ... well, it was simply breathtaking.  The diversity of diving is awesome ... amazing corals, intriguing critters & sharks whizzing around us !  Plus, the visits to islands (where we bought spectacular traditional wood carvings) were very special.  For me, this is nothing less than a "must-do" diving experience!     Dominick Macan

MV Bilikiki is 40 meters (125 feet) in length and has a 24 foot beam.  This exceptionally large size with the extra-wide hull which was built for South Pacific seas, are two of the main reasons guests from around the world still say that the Bilikiki is one of the most spacious and comfortable vessels that they have travelled on.  She was, by the way, also one of the first in the world to offer private showers and toilets in every cabin.

The sundeck is huge and you'll find plenty of covered areas for your down-time.   Everything is spacious, the dive deck, the charging stations and camera areas  And, you'll love the very experienced and enthusiastic crew.  The food is wonderful and fresh as much of it - particularly fruits & vegetables are bought from villagers along your route.

Photographers always appreciate the facilities provided and the space to store equipment and work with your artwork.   Power is 240V and Australia style 3-prong outlets but there are also American style 110V 60 outlets for charging cameras, strobes, divelights, etc. 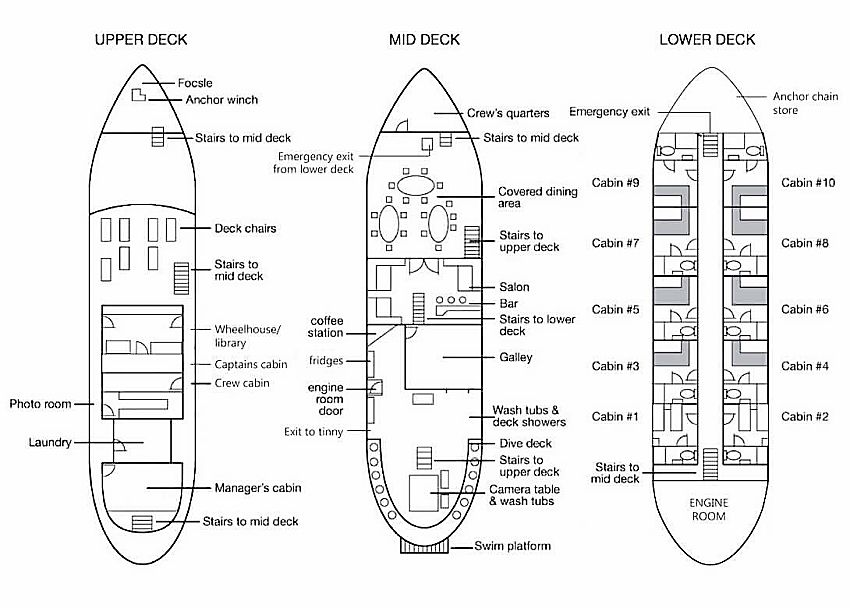 7 night trips are usually within the Florida Islands, Russell Islands & Mary Island.  10 and 14 night trips often add in Marovo Lagoon in the New Georgia Islands.  The rule of thumb, however, is to keep rotating the sites visited to protect the dive sites and creatures we come to see.

The Solomon Islands has an amazing array of varied, rarely visited dive sites. Bilikiki Cruises does not have a fixed itinerary for dive sites but goes to the best spots possible for the conditions and the interests of the guests..... open
The dive sites are suitable for beginners as well as well as advanced divers - with the exception of certain wreck dives.   You'll have the opportunity to access remote island villages which seldom receive visitors and you'll find the people immensely welcoming.   We always recommend that visitors bring gifts.

During a 7 night trip you'll visit the Russell Islands, Mary Island and the Florida Islands to dive the stunning reefs of these areas ... also visit a village to see custom singing and dancing and to see traditional life.  On a 10 night or longer trip, you will also visit the Marovo Lagoon area of the Western Province. On the longer trips the Bilikiki will stop at other villages to see the famous wood carvings of the area. Here you will have to chance to see and buy hand made carvings and other amazing traditionally made items.  Village visits are arranged during the surface intervals so as not to effect the number of dives offered per day.

4 daytime dives and a night dive are generally offered and although there is no fixed itinerary here is an example of some of the dive sites which you can normally expect if the conditions allow:

Leru Cut - A channel back into Leru Island forms a breathtakingly beautiful reef formation which when dived at the right time of day has amazing beams of light and fantastic photo opportunities. Surface at the end and see the vine covered cliffs and jungle before descending and exiting onto a sheer wall of fans and soft coral.

White Beach - The site of an American WWII base where trucks, bombs and ammunition was dumped into the sea. Both a fascinating historical dive and a fantastic macro site in an unusual mangrove location.

Mirror Pond - A stunning pond reflecting the jungle overhead. Outside on the reef is a sheer wall where snappers and travelly hunt and pygmy seahorses hide in gorgeous gorgonian fans. The shallows host a stunning coral garden where crocodile fish, cuttlefish and anemone fish live.

Karumolun Point - The chief of Karumolun Island has banned all fishing and collecting on this dive site for five years creating a local marine protected area. This point has great soft coral, a big school of jacks, barracudas and lots of sharks, often eagle rays are seen here too. The macro side of this dive site is fantastic as well with disco clams (electric file shells), nudis, cuttlefish, crocodile fish and ghost pipefish among the things seen.

Divers often refer to Mary Island as the “best” dive of a trip. It is an uninhabited island with a stunning amount of hard corals and fish life. The schools of fish are amazing here especially when joined by sharks, turtles and bumphead parrot fish. We usually stay here for the whole day.
Florida Islands

Twin Tunnels - This large sea mount, in the middle of the channel between Guadalcanal and the Florida Islands, has two tunnels which drop vertically straight down from 12m and exit in a cave at 35m. Swimming out of the cave to the sheer wall there are schools of fusiliers with grey reef sharks cruising by. It is also home to some amazing coral, cuttlefish, octopus and mantis shrimp plus schools of snapper, tropical fish and an amazing array of anemone fish.

Devils' Highway - The best place in the Solomons to dive with manta rays. A channel between two islands funnels water to form a strong currents and an adrenaline filled dive. Drift along the reef top, duck under the reef wall and watch as up to a dozen mantas swim close by in formation to feed. They are often joined by sweetlips, jacks and bumphead parrotfish.

Japanese Mavis Seaplane - A Japanese seaplane sunk during WW2 which sits upright on the bottom at 30m, it is an impressively large, mostly intact plane. This site is also excellent for macro subjects with reef top pipefish, twin spot gobies and spine check anemone fish.

Kicha - Not only is this dive site a truly stunning example of hard corals and sea fans, it is teeming with fish life. Friendly batfish follow divers around, schools of jacks and barracuda circle around the point while giant bumphead parrotfish chomp on coral. All this amazing colour and beauty passes by to a sound track provided by the underwater volcano Kavachi which is only 15 miles away.

Mbulo Caves - A series of interconnecting caves and swim throughs with beautiful sun beams and a magical atmosphere. There is also staggering hard coral and tropical fish on the reef out side.

Wickham Island - There are a lot of amazing dive sites around this island. It has something for everyone with soft coral points, huge sea fans, sharks and rays. Plus great places to look for the small stuff such as pygmy seahorses, cuttlefish, crocodile fish, snake eels and many different species of anemone fish.

Japanese Maru #2 - A Japanese cargo vessel sunk by American bombers in WW2 this is a a stunning photogenic wreck covered in black corals. A deck gun lies hanging over the side of the ship and trevally and groupers hunt the decks.

BILIKIKI trips start and finish in Honiara, the capital of the Solomon Islands and home of the international airport.   All vessel departure & arrival dates are designed to try work with the incoming and outgoing flights so, in general, overnights are not required.  We'll let you know at the time of booking if you need to plan to overnight.

A representative will meet you at the airport and transfer you to the vessel, or if your flight is earlier than the boarding time to a nearby hotel where you can relax.  Boarding time on the first day is normally around 4PM.

Disembarkation is around 8AM on the last day.  On the last day you generally have a few hours to look around town before transferring back to the airport.  Also,it's possible to do one of the interesting World War II history tours of Honiara.