Located on a spacious 6-acre property 20 minutes from the Wilpattu National Park, the Aggressor Safari Lodge offers 8 private, luxury tents for guests   ... a bar, an inviting dining tent,  a classy lounge & entertainment area,   ...plus a large swimming pool, an outdoor seating area with a fire pit and beautiful grounds with animal life.   The property is located on the Kala Oya River which borders Wilpattu National Park giving the river view tents direct views of the park.

All chalet tents are air-conditioned and have private bathrooms with a bathtub & shower, hair dryer, shampoo, conditioner, robes, and a safe to lock your valuables. The lodge has plenty of hot and cold water with very good water pressure.

There is a variety of nightly entertainment, including movies, games and books.  Meals are included.  You'll have a cooked-to-order breakfast, picnic lunches and an elegant dinner with table side service.  Beverages (alcoholic and non-alcoholic) are complimentary while staying at the lodge.

Scroll through the photos below for a "taste" of your safari experience .....

The Aggessor team will escort you to two of Sri Lanka's world-class wildlife parks which are filled with magnificent wildlife. In addition, they will take you to visit amazing world heritage sites dating as far back as the 3rd century BC.

Wilpattu National Park: the largest and oldest park in Sri Lanka and world known for its diverse wildlife including leopards, sloth bears, elephants, jackels, water buffalo, barking deer, spotted deer, sambar deer, marsh and mugger crocodiles, wild boar, different varieties of monkey and hundreds of species of local and migratory birds.  While known for its leopard population, please note that leopards are very reclusive.  Spotting one is a lucky happenstance!   But, be on the look-out.  They're there and you may be one of the lucky ones to get that perfect shot ....

Minneriya National Park: home to the largest Asian elephant gathering known to exist.  More than 300 elephants live in this area.  You will look out over a vast reservoir of flat drying grasslands and gently rippling water.  Shadows begin to emerge from the surrounding jungle one by one as elephants slowly make their way out of the trees towards the water.  You’ll see them drink, play and snack on the green, lush grasses exposed by the receding water.

World Heritage Site: Sigiriya Rock is known to many as the Eighth Wonder of the World. The Sigiriya rock plateau, formed from magma of an extinct volcano, is 600 feet higher than the surrounding jungle. From the 3rd century BC the rocky plateau served as a monastery and a palace ... just until the 14th century when it was abandoned. The most striking feature is the Mirror Wall. It is painted with inscriptions and poems, the earliest of which date from the 8th century. The palace and fortress complex was declared a World Heritage Site in 1982.

Ancient City of Anuradhapura: The Anuradhapura Kingdom was established in 380 BC. The ancient city, considered sacred to the Buddhist world, is surrounded by monasteries and is famous for its well-preserved ruins of an ancient Sinhala civilization. This is also a World Heritage Site.  The "living" city here, sitting on the river side-by-side with the ruins of an older civilization, makes Anuradhapura one of the oldest continuously inhabited cities in the world.

You'll want to arrange your international flights to Colombo, Sri Lanka and we recommend at least one night in Negombo, near the airport, before being picked up by an Aggressor driver who will take you to the Safari Lodge ..... click to see a day-by-day itinerary for 6 nights & 7 days ....

This is a sample itinerary.  Weather & conditions will always dictate the final tour choices. You will enjoy daily jeep safaris with private guides to Wilpattu and Minneriya National Parks & trips in air-conditioned mini-bus to cultural sites.

Day 1 - Wilpattu National Park
Departing from Negombo at 8:00 am, you will travel to the Aggressor Safari Lodge near the Wilpattu and Minneriya National Parks. The travel time is several hours.

After check-in and lunch, it's time to head out on an afternoon safari into Wilpattu National Park with potential to see leopards, elephants, bears, buffalos, deer, crocodiles, jackals and many other animals and birds in their natural, jungle habitat.  Then, back to the Safari Lodge for dinner at night fall & sounds of the jungle.

Day 2 - Sigiriya Rock Palace and Minneriya National Park
You'll leave the lodge at 7:00 am, after an early breakfast, to travel to the 5th Century AD Sigiriya Rock Palace. The palace and fortress complex takes several hours and you'll have the opportunity to climb from the bottom to the top for spectacular views and to inspect the oldest parts of the ruins.

After lunch at a local restaurant, you have another afternoon safari adventure, this time into Minneriya National Park. which during dry season hosts the largest known Asian elephant gathering on Earth. Regardless of which season you're there, you'll be able to watch (and photograph) safely from your jeep as the huge animals romp & play ...snack on the lush green grasses ... and refresh themselves in the lake. Dinner follows back at the Safari Lodge.

Day 3 - A day of rest and relaxations at the lodge
You have had long days up to this point, with loads of stimuli.  You deserve a vacation !  However, if you're up for more excitement, a local guide is available for a village walk or for exploring the flora and fauna on the safari lodge grounds.

Day 4 - Anuradhapura
After breakfast, it's a 7:30 am roll-call for your transport to the 3rd century BC city in Anuradhapura, which served as the capital city of the country for nearly 1400 years.  Until the 11th century, it remained one of the most stable and durable centers of political power & urban life in South Asia.

The city houses the Jetavana, the Abhayagiri Dagaba and the Ruwanwelisaya stupas which harbor ancient Buddhist relics and the remains of Buddhist monks and nuns. The 231-foot high Jetavana stupa is the largest stupa in the Buddhist world ... in both dimension and mass.  An impressive sight.

After this visit, you'll be driven to Polonnaruwa where you'll check into a luxury hotel for lunch and an overnight stay.  At about 6:00 pm, you'll have the opportunity to set out on a 2-3 hour evening safari to see the elusive and shy Sri Lanka slender loris in its natural jungle habitat, then return to the hotel for a late dinner.

Sleep well ... as you'll leave the hotel at 5:30am after an early breakfast.  Today, you're off to Sri Lanka’s Primate Center for a "monkey excursion".  Established over 50 years ago, the Primate Center is where Disney Studios filmed the movie "Monkey Kingdom" and it's home to three species of Sri Lankan monkeys: the Toque macaque, the gray langur and the purple faced langur.

While visiting the monkeys in their natural jungle communities, visitors can observe their complex social interactions. You're likely to view the primates nurturing young, in courtship & cooperation, and in displays of dominance and aggression.

Time now to return to the Safari Lodge for lunch and a free afternoon to relax on the grounds or enjoy the swimming pool.

You'll be given the choice of morning or afternoon half day safari in Wilpattu National Park.    Lunch is provided inside the Park in an area frequented by troupes of monkeys.  Again, for your time off at the lodge, a local guide is available for exploring the flora and fauna on the lodge grounds ... or you can simply "hang out".

Day 7 - Early breakfast and a return to Negombo

We strongly suggest an add-on of several days, before or after your Safari Lodge stay.  We know Sri Lanka well and are always happy to help you with your planning.

Colombo (CMB) airport is the only international airport in Sri Lanka. We recommend that you spend a minimum of one night in Colombo or Negombo before leaving for the Safari Lodge.  Negombo is close to the airport and offers a more relaxed pace and some delicious seafood.  There are plenty of large international-style hotels but also small local-run guesthouses which are a delight ....... click to open for details ....

GETTING THERE & AWAY .... TRANSFERS TO AND FROM THE LODGE

Overnight before the Safari Lodge:  Aggressor's hotel of choice in Negombo is Jetwing Beach Hotel.  Transportation from the airport to the host hotel is not included but can be arranged for you.  Your morning pick-up will be from Jetwing Beach Hote so if you choose another hotel or a guesthouse, you may want to choose one fairly close to Jetwing.  Pick up time from the Jetwing is 8:00 am.  You will have a 2 ½ hour trip to the safari lodge.

On the last day of your trip, check out is at 11 am so you will be able to enjoy a leisurely breakfast before departing back to Colombo or Negombo.  You will be taken back to the Jetwing Beach Hotel if you are extending your stay in Sri Lanka or to the airport if you are flying home ... or onto a liveaboard diving trip in the Maldives or the Red Sea..

E-Visa ETA are required for all travelers.   It takes approximately 10 minutes to complete and pay for online and is good for a 30 day stay in Sri Lanka. The cost is $35 (subject to change without notice) and most airlines will want to see the printed and approved ETA upon check-in when flying to Sri Lanka. This is the responsibility of each traveler.

All private luxury chalet tents are air-conditioned, have memory foam mattresses, private bathrooms with a bathtub/shower, hair dryer, shampoo, conditioner, robes, and a safe to lock your valuables.The lodge has plenty of hot and cold water with very good water pressure.

Linens are changed daily(upon request)and fresh towels are placed in each chalets needed. 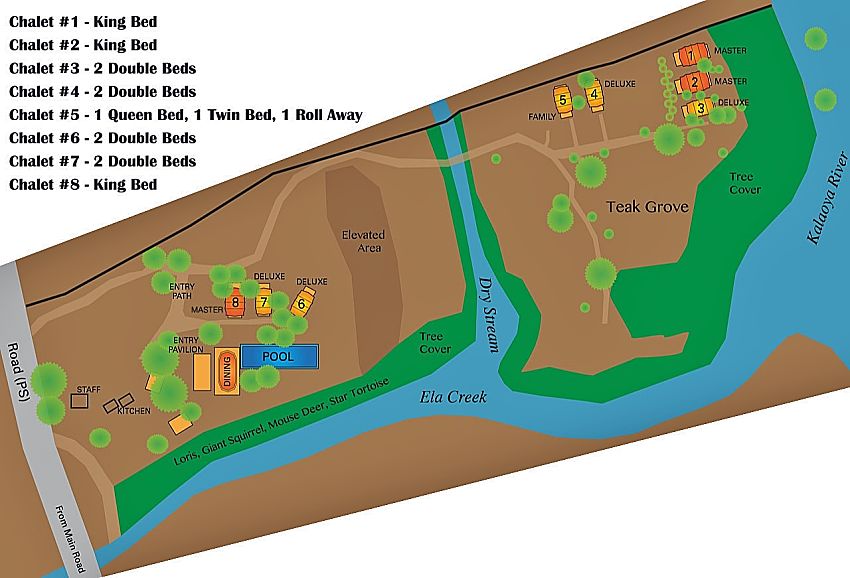 Per person rates, inclusive of meals & most transportation, are the same for all three types of safari tent

INCLUDED IN THE RATE:

We strongly recommend that each guest purchase comprehensive accident, medical, baggage and trip cancellation & interruption insurance. Trip insurance will protect you from financial disappointment if you are prevented from making your scheduled trip due to illness or in the event that unforeseen circumstances occur.

Stays are 6 nights ... from Sunday to Saturday.
Reservations are not available online.