The Phinisi is a 34 meter (112-foot) yacht offering itineraries in the Similan & Surin Islands, Thailand & the best dive sites of the Mergui Archipelago. She accommodates up to 18 guests.

A word from Dom  "Operated by Worldwide Dive and Sail who have the Siren & Master Liveaboards, the Phinisi offers the same standard of service you find on a Siren or Master liveaboard ... a lovely option for Thailand's colorful waters."   ...  Dominick Macan

ON BOARD THE PHINISI

The Phinisi was built in Indonesia in 2007 and has dived Indonesia, Thailand and the Maldives. She’s now back in Thailand cruising the best of the Andaman Sea and further north into Myanmar’s Mergui archipelago.   She has 7 plush cabins with private bathrooms and individually controlled AC and fans and takes a total of 18 guests.

Communal areas are both beautiful and relaxed.  There is a shaded outdoor area for relaxing and dining at the rear of the upper deck and a lovely sundeck with cushioned loungers.  Naturally, the common areas include an indoor lounge where you can find the charging stations for your electronics and the media center for listening to music or watching a video of your day’s diving.

Food is taken seriously on board The Phinisi. To start the day there is a light breakfast, then after the first dive 'the Full Monty' is served.  Lunch is served after the second dive, an Asian affair with plenty of seafood, various meats, rice, noodles, vegetables and fresh salads. Dinner consists of a full complement of Asian dishes but also western food.  Between meals you'll always find fresh fruit available, cookies in a jar, and after the night dive there will be some snacks waiting for you. 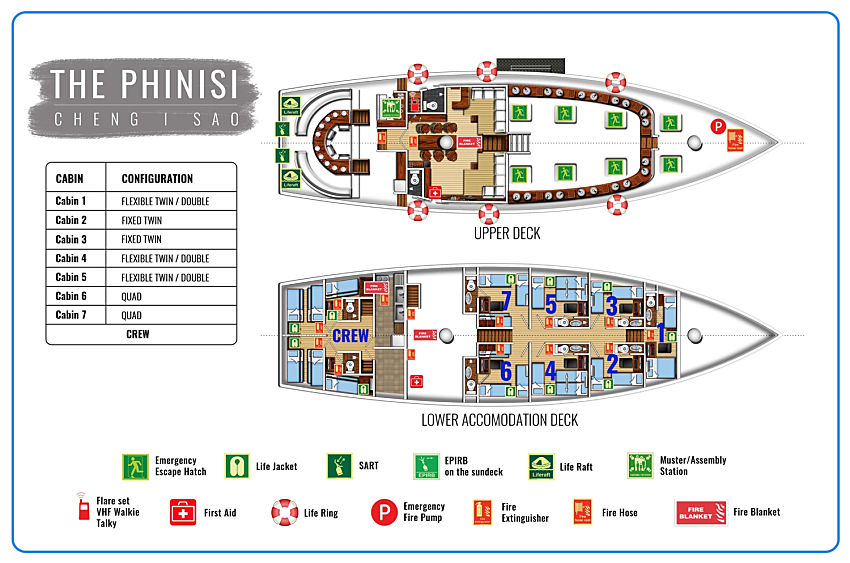 The Phinisi has been offering multiple short itineraries but is now concentrating on 10-night Best of Thailand trips (northern & southern sites in the Andaman Sea including the Similan & Surin Islands) plus 7 & 10-night  trips into Myanmar (Burma).

The above water scenery will provide stunningly beautiful white sandy beaches with small forested areas. Under the surface you get other-worldly topography with great tunnels & caves & swim-throughs … corals in a kaleidoscope of colors, some shark action, lots of reef fish, pelagic fish, some super macro sites, plenty of turtles & eels … and in season, mantas and whale sharks.

Elephant Head Rock - the biggest pinnacle in the Similans, has some fantastic swim-throughs. You may see white tip reef sharks, batfish, trevally and barracuda plus in the rubble you can see smashing mantis shrimp, porcelain crab, moray eels and cleaner shrimp.

Koh Tachai -  famous for its pinnacle dive site and more relaxed reef diving. Normally, turtles, barracuda, pipe fish, and nudibranchs can be found here. there is also a chance to see bigger species in this area like manta rays and whale sharks, especially by late January till April.

The exquisite scenery of Koh Surin offers evergreen forests, mangroves and small beaches. Uderwater, the reefs of Surin have the greatest hard coral diversity in Thailand you’ll be likely to see Napoleon wrasse, yellow-masked angelfish, bumphead parrotfish, tomato anemonefish and barramundi, as well as lots of turtles that still come ashore in this area to lay their eggs.

Khao Lak Wrecks - There is a choice of easily diveable wrecks between The Similan Islands and Khao Lak. These lie in shallow water and are covered in nudibranchs and shrimps as well as large numbers of the unusual honeycomb moray.

There are multiple good wall dives around the Phi Phi island group. The walls can have gorgonian fans, soft corals and coral bushes and interesting rock formations and swim throughs. At the base of these walls there are often hard coral gardens to explore. You can expect a great amount of fish life, including lionfish, wrasse, moorish idols, angelfish, rays, trevallies. Also keep an eye out for leapord sharks sleeping on the sandy bottoms or blacktip reef sharks cruising the reefs.

Rocky Island - a steep rocky reef with lots of tube and fan corals and a huge colourful anemone garden with massive schools of snappers. Lots of critters hang around the cracks in boulders, including nudibranchs, pipe fish and, razor fish, and seahorses. Look out for hunting wahoo, tuna, and barracuda passing in the blue. Visibility and currents can sometimes be challenging but it is a rewarding site.

Black Rock - a natural magnet for oceanic mantas and other large pelagics such as whale sharks and eagle rays. Also known for its small colorful corals & gorgonian fans, snappers and a wide range of invertebrate life.

Shark Cave, Submarine and Square Rock - large tubastrea coral trees sprout from the rocky terrain, accompanied by crinoids, gorgonian fans, blue dragons, and pastel green rope sponge. Tiger tail sea horses are often encountered as are many varieties of morays. Shark Cave features nurse and white tip reef sharks which lurk inside of the cavern along with marble rays, ghost pipefish and plenty of other critters.

A few airlines have direct international flights into Phuket, which is where the boat leaves from for Similan Islands trips.  Howerver, for most travellers, the more practical solution is an international flight to Bangkok, Thailand (BKK).  It's then a quick flight from Bangkok to Phuket (HKT).

For trips into Myanmar (Burma), the boat departs from Ranong, Thailand, which is roughly 250 kilometers north of Phuket Island.  International flights should be booked to Bangkok (BKK).  From here you can transfer to Bangkok's second airport Don Mueang Airport (DMK) to fly to Ranong Domestic Airport (UNN).

Myanmar Itinerary
You will depart from and return to Ranong port, which is north of Phuket.