A note from Dom  ...  Volcanic Vanuatu

Vanuatu is still on my list of "want-to-do" destinations.  However,  there's quite a story I'd like to tell you about a couple of my buddies who were diving on the SS Coolidge in Vanuatu in March 2015, just 2 days before these islands were devasted by Cyclone Pam.  It's partly their story & partly the story of a long-lost wartime hero.... read more

Happily, I can report that Emery & Tom both flew out just before the storm blew through, but during their stay, they ran into & spent some time with a team of army divers who were there to try to retrieve the remains of one of only two soldiers who lost their lives in the wartime tragedy of the Coolidge sinking (out of nearly 5,000 troops aboard the ship).

The story goes that a certain US Army Captain Elwood J Euart, who had already escaped the sinking ship during the morning of October 26, 1942, learned that there were soldiers who were stuck in the infirmary.  Capt. Euart returned to the ship, which was lying on its side, and risking his own life he apparently safely rescued these men, but was unable to climb the rope to safety himself, due to the shifting angle of the ship.

A few years ago, rumors circulated that a dive guide in Santo had found a bone on the Coolidge.  Others say that divers in 2012 found signigicant human remains and hid them.  I can't tell you the "whole truth" but the team of American military divers that Tom & Emery met on their visit had been sent to dive the Coolidge to try to find .. and retrieve ... the remains of the Captain who had risked & lost his life saving his fellow soldiers.

The diving team did indeed find remains and recent DNA analysis has confirmed that they belong to Captain Elwood Euart, who has been officially honored for his bravery, and, has remains have been returned to his family.

Tom and Emery, by the way, reported superb diving and highly recommend the experience!

Check it all out here on our Vanuatu page and when you're ready to hear more, I'm an email away and will respond to your request with any additional details that you wish.       Cheers, Dom

Many divers think of Vanuatu diving as just the wreck of the SS President Coolidge, former luxury liner turned into a WWII troop carrier, which was sunk in Vanuatu by a "friendly" mine and which contains a wealth of memorabilia at an easily accessible depth.

But, as you've just seen in our summary above, these islands have more to offer if you have time to stay for it.  The major resorts have good reputations and offer quality dive operations.

The islands themselves are paradisical tropical rainforests, with white sand beaches, hot springs, waterfalls and a refreshing lack of tourism.

As to the diving itself, while the wrecks are certainly the big draw, the corals are healthy, there's some good fish life on the reefs and the caves, grottoes & tunnels add a bit of unusual excitement and there's growing interest in fresh-water diving in "blue holes" ... natural springs whose waters run through connected sinkholes and caverns.

But, the bottom line is that what draws divers here is absolutely the Coolidge, one of the finest wreck dives the world of diving has to offer. 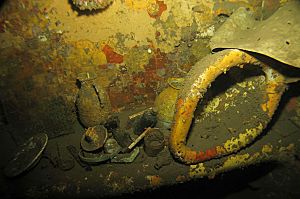 SS President Coolidge
The ship is covered with both hard & soft corals. Before you enter the interior, you'll be greeted by trigger fish, lion fish, nudibranchs & a resident green moray eel, all in glaring contrast to the cannons they adorn & inhabit.  Inside you'll find gas masks, helmets, ammunition, rifles ... all the accoutrements of a soldier's life including personal items.  In the holds, you find major military equipment including trucks, jeeps, ambulances & cannons.  You can swim through the control room, see the turbines & shaft and visit the galley where you'll get a feeling for food preparation on board. Pretty well everything that was used in daily ship life is there for you to ponder.    ... read more ...

The doctor's office and infirmary still have medicines and syringes while in the barber shop, you find the actual barber's chair still there and the soda fountain has masses of coke bottles.

Perhaps most astonishing in this entire experience are the remnants of a luxury liner. In the midst of all of this military paraphernalia, there remains a beautiful mosaic fountain, a porcelain statue of a lady and a unicorn, a first-class dining room, lobby, library and swimming pool.

The contradictions will almost certainly leave you contemplating the complexities of war.

Adding fascination to the history is the recent expedition of American military divers who found the remains of Army Captain Elwood Joseph Euart, who, after escaping, returned to the ship to free soliders who were trapped in sick bay.  According to records, they all got free with his help but Captain Euart was unable to climb the rope to safety before the ship slipped further into the water, taking him down with it.  DNA results have confirmed that indeed the remains recovered in March of 2015 are those of the heroic army captain ..... and a plaque in his honor has been placed upon the shipe ....

The Republic of Vanuatu, a volcanic archipelago lying in the South Pacific Ocean, east of northern Australia, northeast of New Caledonia, east of Papua New Guinea, southeast of the Solomon Islands and west of Fiji.  There are approximately 83 islands, 65 of which are inhabited.  With several active volcanoes, the chain of islands is always at risk of earthquakes and eruptions.  Information about the history of these islands before European settlers arrived is virtually non-existent as the volcanic nature of the islands has likely obliterated archaeological evidence.